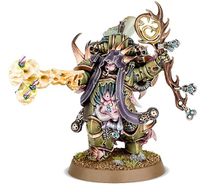 Malignant Plaguecasters are Chaos Sorcerers of Nurgle. Often serving in the Death Guard Legion, they wield diseased magic and wield a Corrupted Staff and Blight Grenades.[1]

Potent Death Guard Sorcerers, these vile psykers are warp-rotted from their pallid, flyblown skin to their ever-churning innards. They have bargained away what remained of their souls in exchange for Nurgle’s blessings, and been gifted with the ability to channel the malaise of the Plague God’s realm.[2]

The bloated bodies of Malignant Plaguecasters have become living conduits for the Garden of Nurgle’s toxic miasmas. Flesh-eating spore clouds, droning plague flies, vomitous mists and plague-laden corpse gas roil within the Plaguecasters’ guts, at times straining their skin to bursting point. With retching exhalations, the Plaguecasters blow these lethal clouds across the battlefield. Around a Plaguecaster Warriors collapse, choking upon their own rotting lungs even as their flesh blackens and liquefies. Armor corrodes and weapons malfunction as they are eaten away. Even sealed fortifications offer no protection.[2]