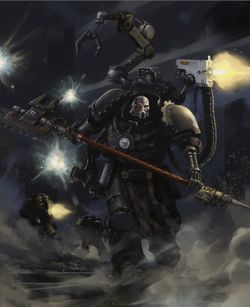 Malkaan Feirros is an Iron Father and Master of the Forge for the Iron Hands Chapter, who has undergone the operation to become a Primaris Space Marine[1].

Feirros is considered a maverick by the Iron Council, as he continues to cling to emotion and refuses augmentation to purge it from his mind. To Feirros true wisdom lies in the balance between logic and emotion - a balance that Ferrus Manus himself was unable to achieve. The fact that Feirros continues to remain Master of the Forge despite these quasi-heretical beliefs is both testament to his skill and his connections, for current elected Chapter Master Kardan Stronos was once the Iron Father's pupil and continues to hold him in great respect. Though Feirros does not seek to overthrow the Chapter's long-held views, many within the Iron Council consider his influence corrupting. Nonetheless Battle-Brothers revere him, and he continues to act as a counterbalance to the false solace of logic. If the Iron Hands had a soul, it would be Malkaan Feirros.[3]

Following the Skarvus Ambush the Iron Council was poised to censure Clan Raukaan entirely, but it was Feirros who advocated that they be given a chance to prove themselves under new leadership. Ultimately Feirro's old political foe Iron Father Kristos came to agree with him. He seized on Clan Raukaan’s fate as a chance to prove Feirros’ waning to the rest of the Iron Council – only to suffer apoplexy when it was decided that he himself, and not Feirros, would be responsible for reforging Raukaan from its battered shards. Too late, Kristos realized that Feirros had goaded him, subverting emotions he struggled to conceal in order to achieve his victory. As a result of Feirros' actions Kristos for the first time realized the value of emotion.[3]

When the Iron Hands received word that Firstborn could cross the Rubicon Primaris and become Primaris Space Marines, Feirros was among the first to volunteer. He welcomed the opportunity to vastly improve his strength and endurance without need for mechanical enhancement.[3]

In battle the Iron Father can effortlessly cut foes down with his shoulder-mounted artificer heavy bolter, Gorgon's Wrath, and hew any who dare to draw within reach of his cog-toothed Power Axe, Harrowhand.[1] 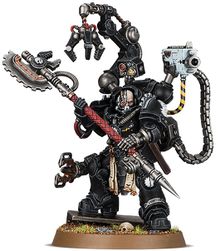