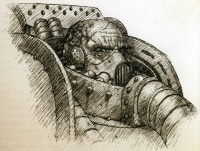 Maloghurst after his injuries on 63-19

Maloghurst, also known as Maloghurst the Twisted,[3] was a Space Marine of the Luna Wolves Legion. He was the Equerry of Horus Lupercal.

Maloghurst grew up in the tunnels of Cthonia as a gang leader. Unlike most gang leaders, who simply pursued petty goals, Maloghurst sought to turn himself into a king. At some point he was grievously wounded by a rival ganger, but was saved by Iacton Qruze and subsequently inducted as a Space Marine.[5b] Maloghurst went on to have a long history within the original Luna Wolves and became fiercly loyal to Horus, who he viewed as something greater than himself which he had always strived towards. He nearly lost an eye capturing the young Kalus Ekaddon so he could be inducted as a Space Marine.[5b] Known as "the Twisted" for the complex workings of his mind, Maloghurst was Horus's chief adviser and public voice, and a shrewd manipulator. He was also a formidable warrior, and was a speculated contender for the First Captaincy (the post held by Ezekyle Abaddon) when Horus made him his equerry.[1]

During the Battle of Sixty-Three-Nineteen, Maloghurst was dispatched to the surface to parley with the "Emperor of Mankind", the impostor leader of the planet, but his Stormbird was shot down and he was seriously wounded in the crash. He was recovered from the surface, and the remembrancer Euphrati Keeler's pict-records of the rescue spread through the 63rd Expedition, making Maloghurst into a war hero. His body was badly mangled by the events (thus truly making him "twisted"), but he remained willing - and quite able - to serve his Warmaster. He also boldly stated that he was aware of his nickname among the rest of the Legion and had no wish to abandon it: his mind was as deft as ever, and if his body was now twisted to fit it, then so be it.[1]

His role in the Heresy itself was as Horus' chief enforcer, ensuring that the Warmaster's orders were carried out. To this end, early on he employed the services of the mute assassin Maggard after he was freed from service to his overbearing remembrancer mistress Petronella Vivar. Shortly before Horus initiated his rebellion against the Emperor, Maloghurst became suspicious of Garviel Loken's loyalties and placed a Warp-eye spying ritual on the remembrancer Mersadie Oliton before erasing her memory of it. Unknown to Maloghurst, years later the warp-eye was used by Samus to manifest in the bowels of the Phalanx during the Solar War.[6] During the Battle of Isstvan III he directed Calas Typhon of the Death Guard to stop the fleeing frigate Eisenstein before it could escape and warn the Emperor of Horus' treachery.[2] He later again appeared advising Horus in the Battle of Molech.[4]

Studying the powers of Chaos from Erebus, Maloghurst became quite adept in the occult and Daemonancy as the Heresy ground on. Serghar Targost began to suspect that he had grown more powerful and was now feigning his injuries. Shortly before the Battle of Molech, Maloghurst performed a ritual where he violently sacrificed captured Humans to the Ruinous Powers and summoned Tormageddon. Maloghurst intended this Daemonhost to be the first in his army of Possessed: the Luperci[4]

Following the wounding of Horus in the Battle of Trisolian, Horus fell into a deep coma as the Chaos Gods fought over the fragment of his soul that remained inside the gate of Molech. Maloghurst became desperate to revive the Warmaster as the Sons of Horus and general traitor war effort tore itself apart without his guidance. Maloghurst eventually agreed to the aid of Lorgar and Zardu Layak, working with Sota-Nul to gain access to Horus' comatose body upon his throne in Lupercal's Court without the permission of the reluctant Falkus Kibre. Using a Warp blood ritual that involved slitting his own throat and bargaining his very soul, Maloghurst entered the Warp and bound the Daemon Amarok to his will. Using Amarok as a guide, Maloghurst was led to the fragment of Horus' soul still inside the Warp. Maloghurst meets Horus on a battlefield where the Warmaster is battling enemies across space and time. Horus refuses to leave, and before Maloghurst can converse further he's woken up by Justaerin and dragged before Aximand. A Warp-Surge has dropped the fleet prematurely from the Warp in front of the Fortress World of Heta-Gladius, and Aximand intends to waste their forces in a useless struggle for the planet. Maloghurst is jailed inside a prison-maze that constantly moves to disorient the users. Robbed of his warp powers by a restraining collar, he can do nothing but wander the corridors.[5b]

Maloghurst is eventually broken out of the jail by Kalus Ekaddon, who helps him to Horus' throneroom. Along the way, they are forced to battle both Sons of Horus and Blood Angels from Heta-Gladius which have boarded the Vengeful Spirit. Before Horus, Maloghurst conducts the ritual and again finds himself before Horus' fragmented soul, this time at Ullanor before the Triumph. He urges Horus to submit before the Gods and free his soul, saying it's too late to turn back now. Proclaiming that Horus can never be a slave as he chose this path, Maloghurst pulls out a knife and stabs the wound at Horus' side. Maloghurst sacrifices himself to free the fragment of Horus' soul trapped in the Warp, and the Warmaster woke up and resumed control of the Legion in time for the Siege of Terra. Argonis became Horus' new equerry after Maloghurst's death.[5a] 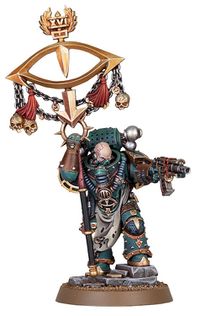