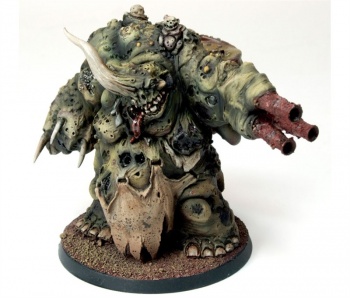 Mamon as a Daemon Prince.

With every death on Vraks our victory comes closer! There is no army in the galaxy that can stop the forces we began to invoke so many years ago. Soon they shall be unleashed at our bidding![1]

Mamon is a Daemon Prince of Nurgle, known as the "Arch-Corrupter of Vraks".[Needs Citation]

It is not known when Chaos managed to subvert Mamon, but he was already corrupted by the time he became a deacon on Thracian Primaris. He then associated himself with Cardinal Xaphan and exploited his ambition and inexperience. Soon, he had Xaphan convinced that a War of Faith was necessary, that the Inquisition would oppose him, and that he needed to move his operations to Vraks.[Needs Citation]

On Vraks, Mamon organized and equipped the most fanatically loyal into Xaphan's bodyguard cadre and summoned the Alpha Legion warband of Arkos the Faithless. Mamon continued to agitate the population and delved deeper into heretical daemon worship, driven by a need for their support.[Needs Citation]

Mamon's influence came to an end when Zhufor the Impaler usurped control of the insurrection. Mamon fled into the arms of the Tainted and offered himself to Nurgle. As Mamon was responsible for turning Vraks into a charnel pit of death and disease, Nurgle was delighted and made him a daemon prince, soon making him host to a Great Unclean One.[Needs Citation]

The survivors worshipped Mamon as their messiah and destroyer of their enemies. He fought alongside the Tainted until the end of the war and disappeared.[2]