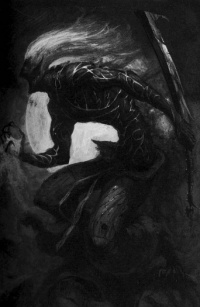 A Mandrake is a type of Dark Eldar native to the region of Commorragh known as Aelindrach.[5]

A Mandrake's physique has adapted to make himself or herself camouflaged almost anywhere. They have evolved the so-called shadow-skin, which makes them nigh-invisible out of direct light. They also exist within a different reality itself and are capable of entering into reality straight out of another person's shadow. No-one knows how this dramatic change has occurred, not even their Dark Eldar kin. While the shadowskin could be just the result of warp exposure, other theories exist. Some consider them to be the very shadows brought to life, while others suggest that Mandrakes are a union of Eldar and Daemon.[1][2][3] There are even rumours that the first Mandrakes were created by Haemonculi employed by the Wych Cult of Grief.[6]

One thing that is known about the Mandrakes is their lethality. Even the brutal denizens of Commorragh fear these creatures. Younger Dark Eldar call Mandrakes "creepers", whispering that they can slink from one shadow and to another. They strike from the shadows, surprising and rending their enemies apart with Glimmersteel Blades, with strength more often associated with Orks, rather than the Eldar.[1][2][3]

Mandrakes are often cannibalistic and wild, living separate from other Dark Eldar.[1]