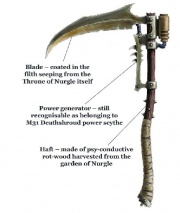 Manreaper of Typhus, Herald of Nurgle

Manreaper is a type of Power Scythe used by the Death Guard.[1]

Manreapers are known to have been carried not only by Mortarion and Typhus, Herald of Nurgle[1] but also by other Death Guard Space Marines.[3][4] It is known that Manreaper of Typhus have been dipped into the filth seeping from the throne of Nurgle itself.[1]