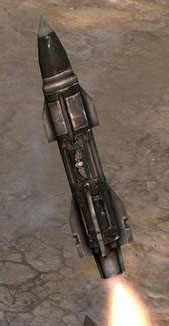 The missile is divided into five sections: a fuse, the control and guidance equipment, the electrical unit, an explosive warhead and a propellant container for the two-stage solid fuel rocket. The first stage, a starting rocket, launches the missile into the air where the main in-flight rocket motor kicks in, propelling it to speeds of 1,080 kph. The standard Manticore missile's warhead is a high explosive fragmentation device capable of causing damage to a wide variety of targets including battle tanks. It can also be replaced by any number of alternatives, such as an oxy-phosphor incendiary warhead for anti-infantry firepower or an Interceptor warhead for targeting high-altitude enemy aircraft.[1a] The standard missile has an operational range of 30 kilometers.[4]

Storm Eagle Rockets are cluster munitions that deliver a payload of multiple high-explosive warheads which separate from the main body of the rocket at the apex of its trajectory. These warheads have a devastating impact on both infantry and armor formations, and the Storm Eagle Rocket is the most common rocket fired from Manticore tanks.[2]

Each storm eagle rocket is a self-contained arsenal. Mounted upon a single-stage booster and fitted with guidance and detonation-augurs, these munitions are capable of extreme range bombardment. The storm eagle warhead contains concentric racks of high explosive bomblets, each soaked in sacred unguents of the Mechanicus and hand-scribed with the One Hundred Canticles of Wrath. Soaring across the battlefield upon a contrail of flame, the storm eagle descends upon its target like an avenging angel. The deafening roar of the rocket’s approach causes foes to abase themselves in terror, or flee screaming in a hopeless attempt at self-preservation. Directly above the target zone, the blessed warhead breaks up, unleashing its payload of bomblets across a wide area. Tanks are sent cartwheeling by concussive blasts, or are completely pulverised by the force of multiple detonations. Infantry are atomised or hurled into the air, blackened bodies tumbling down around the impact zone like ash from a hellish conflagration. Each warhead spawns a thunderous carpet of explosions that leave nought but wrathstrewn debris in their wake.[6]

Other variants include incendiary warheads, chemical weapons, and high-explosive rounds.[2]