The Mantis Warriors (or Mantis Legion) are a Space Marine Chapter, who sided with the rebel Astral Claws during the Badab War. They were granted the Emperor's forgiveness at the conclusion of the conflict.

The Mantis Warriors were founded as part of the 598.M35 founding, created to help relieve the White Scars in monitoring and countering the many threats harboured by the Maelstrom.[Needs Citation]

During the Badab War, the Mantis Warriors sided with the rebel Astral Claws, along with the Executioners and the Lamenters.[Needs Citation]

The first recorded involvement by Loyalist Marines came in 904.M41, when the Fire Hawks ship Rapturous Fire was attacked and captured by the Mantis Warriors.[3] In 907.M41, as Badab was being besieged by loyalists, two chapters were drafted in to investigate the worlds occupied by the Mantis Warriors and Executioners.[Needs Citation] For example, there were a battles on the Gargathea III between join forces of the Astral Claws and Mantis Warriors and the Loyalist Raptor Space Marines. After a harsh encounters Loyalist were victorious and drove the rebells from the planet.[6i]

In 912.M41 the rebellion was defeated and the Astral Claws nearly destroyed. The Mantis Warriors were granted the Emperor's forgiveness and sent on a one hundred year crusade. Their Chapter Master, Khoisan Neotera, was stripped of his honour and armour, and imprisoned in Penitentiacon in isolation for the rest of his life.[3] As part of this penitent crusade their homeworld, Ootheca, was forfeited to the Space Sharks Chapter, which had taken part as loyalists in the war. This meant that for the duration of the crusade the Mantis Warriors would be forbidden to recruit new members, and as of the end of M41 they are critically short of personnel.[Needs Citation]

Many Mantis Warriors believe that their chapter is cursed and many outside the chapter still regard them as traitors despite their official pardon.

"A chapter on the edge of the law, teetering on the brink of oblivion and approaching the borders of extinction, fighting desperately to regain its place amongst the chosen. They were not outlaws or renegades, but they had no home in the Imperium of Man."[4a] 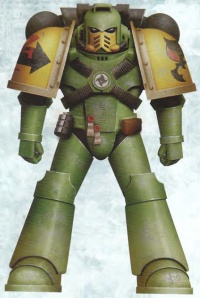 The Mantis Warriors have formed a specialized fighting unit within the Chapter, named the Praying Mantidae, a cadre of warriors tasked with tracking down the renegade Astral Claws. These elite units are given training in excess of that given to "normal" Marines. The Geneseed of the Mantis Warriors has a flaw - it does not function properly with the Preomnor implant. As such, when a Mantis Warrior sets himself into a certain frame of mind the Prenomor gland secretes a potent neurotoxin that permanently changes the marine's physiology; the frame of mind in question is one of deepest penance and piety. This neurotoxin alters the marine's sense of space and time, increasing his reaction rate to near-precognitive states; it also increases his strength to a great extent. To a human it would seem that the warrior is simply stepping aside before anything happens. Unfortunately this marvelous gift comes at a price - the change is irreversible and the marine's sight becomes tunneled to the point of not noticing anything that is not a target. The Mantis Warriors call this state of mind the "Battle-haze". Each Company has a unit of Battle Brothers who have given their all to the Emperor and in acts of such faith have entered the "Battle-haze". These units are called Mantis Religiosa. The Battle Brother who discovered this genetic flaw was called Maetrus, a Captain, who, after organising the "Praying Mantidae" subsequently fell into the "Battle-haze" whilst battling a Company of Astral Claws. When the Astral Claws had been broken and their forces were fleeing, Maetrus plunged after them into the Eye of Terror with single-minded determination, never to be seen or heard from again.[4a]

Since the formation of the Great Rift and their penitent Crusade, the Mantis Warriors have been unable to recoup their losses and are slowly being eroded.[10]

The Mantis Warriors were once second only to the Crimson Fists in the amount of recruits sent into service in the Deathwatch. However after the Badab War, the Chapter would not be requested to join the Deathwatch's ranks due to the Inquisition's view of the Mantis Warriors' heresy during that conflict. This would last for nearly a hundred years, until Librarian Shaidan, Sergeant Soron and Brother Ruinus were seconded to Inquisitor Kalypsia's Deathwatch Kill Team. However, the Mantis Warriors were not full-fledged members - merely filling in for the losses the Kill Team sustained in a Tyranid ambush on Herodian IV (in particular, the three members kept their Chapter colors during this mission and wore no iconography of the Inquisition or the Deathwatch).[4c]