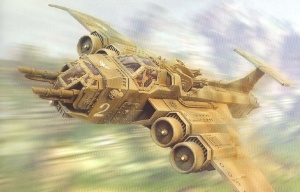 The Marauder Bomber (or just Marauder) is the standard Imperial Navy heavy bomber and can be used both in space and within atmospheres.[2] It is used for a number of different missions, but especially excels in the air interdiction role.[1a]

Marauder Bombers, with their long range and good maximum payload for their size, are the workhorses of the Imperial Navy. They are often based on orbiting spacecraft or, if in a prolonged campaign, on naval airbases established on the ground. Thanks to their capacious fuel tanks and powerful engines, these bases are located far from the frontline, even on another continent.[2]

While capable of fulfilling a variety of roles, they are often used for one of three mission types:

Close support missions have the added difficulty of identifying targets in a constantly-changing battlefield situation, which Imperial Guard commanders solve in a variety of ways. Some regiments use previously-assigned visual markers, such as weapons fire or coloured smoke, to designate enemy targets. Others incorporate forward air controllers to guide aircraft onto the targets. These Imperial Navy personnel, often experienced pilots themselves, will ride in communications vehicles that allow them to talk directly to the pilots overhead. A third method involves a coordinated withdrawal of ground forces prior to an air strike, decreasing the chance of any friendly fire. This is however a dangerous tactic as it requires disengaging from the enemy.[1a]

Within its heavy armoured superstructure the Marauder Bomber carries an internal bomb bay which can carry up to 6,000 pounds of explosives.[2] At maximum capacity it can carry up to twelve Bombs or six Heavy Bombs, while four wing mounted pylons allow it to carry up to twelve additional Bombs. For additional firepower it also carries a pair of twin-linked Lascannons in the nose section, while two sets of twin-linked turret-mounted Heavy Bolters, one in the tail section and the other atop the fuselage, serve as defensive armament.[1c] Instead of regular bombs the internal bomb bay may carry two Hellstorm Bombs, large incendiary devices which convert an area into a destructive inferno.[2] On worlds with extensive oceans, the Marauder may replace its standard bombs with a single torpedo.[8] Like other Imperial aircraft, Marauder bombers can also receive further upgrades. 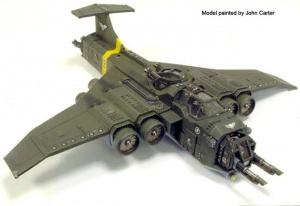 Though principally a bomber, Marauders can also be modified to fulfill other roles.

The Marauder Colossus is a variant of the standard Marauder Bomber designed to deliver a single gigantic 10,000kg Colossus Bomb. The Colossus has been modified to save weight and space, with its dorsal turret removed.[6] 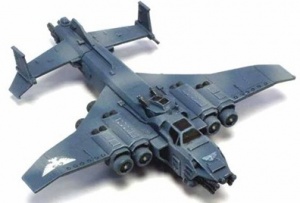 One particular Marauder variant is the Marauder Destroyer, a dedicated ground-attack craft which is better suited to close support missions.[1d]

The Marauder Pathfinder is a electronic warfare and squadron support variant of the Marauder. Equipped with an array of sensory probes, the Pathfinder is used to scout ahead of a squadron and keep an eye on enemy activity.[7] 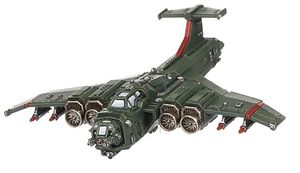 The Marauder Vigilant is a variant of the standard Marauder Bomber designed to conduct reconnaissance operations and also perform as a command and control aircraft. Modifications include replacing its Lascannons with Heavy Bolters and removing the dorsal turret. The bomb bay is also converted to carry heavy surveillance equipment.[3][4] 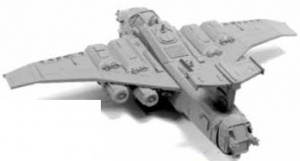