The first recorded use of the Marauder Destroyer was during the Second War for Armageddon. Heavy losses in Imperial Aircraft allowed for Ork dominance of the skies over certain areas of Armageddon. In response, the remaining Marauder bombers were refitted for night operations and flying at low levels to avoid detection. With the new tactics came a new payload, sacrificing bomb payload for additional direct-fire weaponry. Marauder Destroyers have since been used in other conflicts, including the more recent Third War for Armageddon.[1a]

The Marauder Destroyer is used primarily as a low level attack craft for close ground support missions. Indeed the deafening roar of a low-flying Marauder Destroyer often has a positive impact on friendly ground troops' morale. However it lacks the bomb payload for strategic bombing, and while adequate for interdiction missions there are generally too few Destroyers for it to be wasted in this role. Favorite targets of Destroyers include airbases, headquarters and supply depots. These heavily-defended targets, which might normally take an entire squadron of Marauders to carpet-bomb from high altitude, can be more easily destroyed with less risk of failure by a smaller number of Destroyers. Thus Marauder Destroyers are crewed only by hand picked Imperial Navy pilots.[1a]

The Marauder Destroyer has additional tracking and sensor systems compared to the original bomber model allowing it to fly at night at heights as low as 100 meters and at speeds in excess of 1500 kph.[1a] The much smaller bomb bay housed within its armoured superstructure can carry only six Bombs, while mounted alongside the ground surveillance auspex in the nose section are three twin-linked Autocannons supplied by 150-round ammunition drums.[2] While it retains the turret-mounted twin-linked Heavy Bolters atop the fuselage for defensive fire, the tail-mounted Heavy Bolters are replaced by twin-linked Assault Cannons, which are used to strafe targets following the main attack run.[1a] Like other Imperial aircraft, Marauder Destroyers can receive further upgrades. 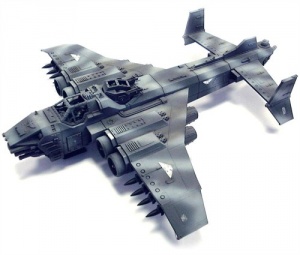