The Marauders are a Successor Chapter of the White Scars[1] created in M33 during the Second Founding, as named in the Apocrypha of Davio[Needs Citation].

The Marauders are a isolationist chapter that while willing to fight alongside other Imperial forces remain aloof and exchange only what information they must to undertake campaigns. Recognized for their marksmanship skill, Marauders often set ambushes for their enemies before hammering them with massed firepower, sweeping down to finish off the ragged survivors.[4] 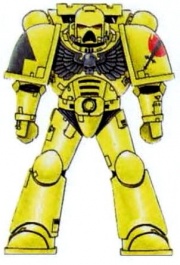