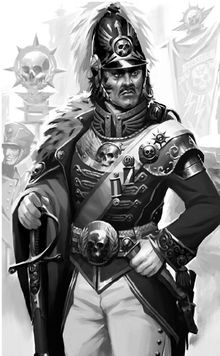 Marcus Valerius was a Praefactor of the Imperial Army during the Great Crusade and Horus Heresy.[1]

Commanding the Therion Cohort, shortly before the Drop Site Massacre Marcus' forces were stationed on the Raven Guard homeworld of Deliverance. During his stay on Deliverance Marcus began to become haunted by strange dreams that seemed to foretell catastrophe for the Raven Guard. Raven Guard commander Branne became suspicious that this was an omen, and eventually left for Isstvan V to see if their Primarch Corax was okay. When they arrived in-system, the Raven Guard had been massacred and Branne was able to save Corax himself.[1]

Later, Marcus led the Theroion cohort in the attack on the Perfect Fortress.[1] However after having visions of Leman Russ meeting his end at the hands of traitor forces, Valerius confided to Corax of the supernatural nature of his visions as well as his belief that it was the guidance of the Emperor, who he now worshiped as a god. This enraged Corax, but he nonetheless followed Valerius' visions, resulting in the Raven Guard saving the Space Wolves in the Battle of Yarant.[2]

Due to his beliefs, Corax banished Valerius and his sight. He eventually made his way to Beta-Garmon, where he led the Therion Cohort against enemy Titan's in the Battle of Beta-Garmon.[3]