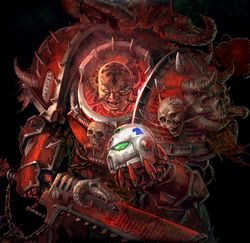 Marduk of the Word Bearers Legion was a former first acolyte to Jarulek, later becoming a Dark Apostle upon his master’s death.

Born on Colchis, Marduk was inducted into the Word Bearers shortly before the Horus Heresy.[3]

He became a member of the internal sect known as The Brotherhood and took part in the Second Purge against Terran Astartes, during which he recieved a commendation from the Dark Apostle Jarulek.[3]

A promising, but young psyker, Marduk had only been a Legionnaire for twenty or thirty years when he was assigned to study under Captain Bel Ashared as a postulant, and was part of his unit at the beginning of the Battle of Calth. They travelled with Sorot Tchure on the captured Ultramarine cruiser Samothrace when the Word Bearers attacked the Zetsun Verid shipyards. Marduk considered himself his master's superior in the arcane arts due to his regular communion with the daemon Drak'shal, who was teaching him much more than Bel Ashared did, and Marduk felt, could. His relationship with his Captain therefore quickly became strained. During the assault on the shipyard, Bel Ashared ordered Marduk to join a different squad. It was in this squad that Marduk first met Burias, a novitiate who would come to be the closest thing Marduk would ever come to call his friend. When his Sergeant was killed, Marduk attempted to bind Drak'shal to the corpse of the Ultramarines veteran who had killed him, but Bel Ashared came upon the scene and, shocked at what he saw, and angered at Marduk's defiance, ordered his pupil to be executed. With Drak'shal's aid, Marduk turned the Captain's body inside out.[1]

Marduk was imprisoned aboard Calth's orbital weapons platform for murdering a superior. Upon Kor Phaeron's arrival there, the Dark Cardinal had Marduk brought before him. Bel Ashared was a member of the Dark Heart, Kor Phaeron's personal agents. When Marduk explained his actions, Kor Phaeron saw the potential in him and allowed him to live. Marduk soon found himself fighting alongside Kor Phaeron, Sorot Tchure, and the Gal Vorbak when Roboute Guilliman teleported aboard, and witnessed Kor Phaeron's defeat before helping to bear his injured body to safety.[1]

Blessed with visions from the Chaos Gods, Marduk (along with his long-time rival Kol Badar) served under Jarulek as part of the 34th Host's conquering of the planet Tanakreg and the enslaving of the population into creating an immense Gehemehnet. After fending off the combined forces of both the Imperial Guard and the Adeptus Mechanicus, the unholy construct shattered the crust of the planet exposing a dormant Necron Monolith.[Needs Citation]

He accompanied Jarulek deep into the tomb to recover the Nexus Arrangement; a powerful artifact capable of creating Warp Storms able to isolate entire systems. Once at the centre of the tomb Jarulek tried to kill his apprentice to fulfill his own prophecy, but as the two fought, he himself was slain by the re-awakening Necron Lord. Marduk made his escape with the artifact and his master’s Accursed Crozius. Now in command of the 34th Host, Marduk battled Tyranids and Dark Eldar in the search of a way to activate the deadly artifact.[2a]

Marduk returned to Sicarus with the Nexus Arrangement in hand, gaining fame among the Dark Council and being properly anointed as a Dark Apostle. He was later assigned by Erebus to take part in Ekodas' and Ashkanez's offensive towards the Boros Gate, but engineered his overseers destruction at the hands of the Grey Knights. Marduk also uncovered a conspiracy by Kor Phaeron against Erebus, and this allowed him to finally gain the favor of the powerful Grand Apostle. With Ekodas dead, Marduk was made a member of the Dark Council.[3]

Marduk has proven to be highly favoured by the Gods of Chaos, and on multiple occasions has demonstrated the ability to summon daemons directly from the warp to aid him in battle, without requiring the extensive rituals of preparation and sacrifices usually needed for summoning's to occur.[2b] He is also armed with the Daemon weapon Borhg'ash; an archaic Chainsword which feeds on the blood of those it strikes.[Needs Citation]