The Marines Errant are a fleet-based Space Marine Chapter, operating at the fringes of galactic space.[1] 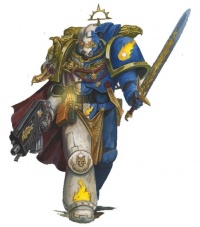 The Marines Errant signed a pact with the Rogue Trader house under Sia'hadn Ecale in 390.M38. The two powers combined their resources to explore the Ghoul Stars for more then forty years.[3]

The Third Company of the Marines Errant also accompany a Rogue Trader Milos Baral in his expedition to the planet Prath-Veil.[7]