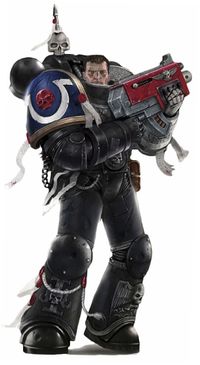 Marius Avincus is a Space Marine from the Ultramarines and a Watch Captain of the Deathwatch.[1]

Born to a noble family on Prandium, Marius Avincus Caeso was recruited into the Ultramarines with his twin brother Gnaeus, and both served together for centuries. After more than three hundred years in service to the Ultramarines, the brothers faced a horror the likes of which none could imagine — the Tyranids attacked Prandium. Gnaeus was slain, crushed by a Carnifex while trying to defend refugees being evacuated from their homeworld.[1]

Avincus was furious at what the Tyranids had done, and he was given the opportunity to strike back against them during the Battle for Macragge, where he fought valiantly amongst the 3rd Company, seeing many of his Battle-Brothers slain during the brutal tunnel fighting. In the years that followed, he was amongst those survivors who were chosen to join the 1st Company as one of Chaplain Cassius' Tyrannic War Veterans. Twelve years later, he was nominated for Deathwatch service, and he gladly swore the Apocryphon Oath in order to share his experiences with those outside the Ultramarines, to give them a fighting chance should the Tyranids return.[1]

In the sixty years since beginning his long Vigil, Avincus has fought countless xenos threats and proved his dedication and prowess time and again, being elevated to the rank of Watch Captain in 792.M41. When word came of the Tyranid onslaught, Avincus relocated to the Orpheus Salient immediately, selecting the swiftest ship available and the surest Navigator he could find to brave the smothering influence of the Shadow in the Warp. His loathing for the Tyranids is unending, and he is unwilling to allow them to freely prey upon yet more worlds.[1]

At present, Avincus remains mobile, employing his chosen ship — the Nova-class Frigate Hallowed Sword — as a mobile command centre from which he directs the Kill-teams under his auspices, leading on the ground as frequently as the opportunity allows. His presence has been instrumental in dozens of missions against the Tyranids, but it has been costly as well. During the battle for Trimalov Hive on Castobel, Avincus confronted the infamous Dagon Overlord, suffering grievous injuries at the talons of that terrifying creature, which left him crippled and forced him into a coma from which he did not wake for eleven months.[1]