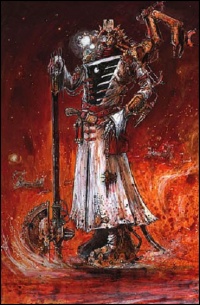 Lord Marius Hax is the Imperial Governor of Scintilla and Sector Lord of the Calixis Sector[1].

Marius Hax (whose formally correct title is “Lord Sector” or “Lord Calixis”) is descended from an ancient family of Terran stock, a bloodline bred for leadership in the Imperial heartland of the Segmentum Solar. He was appointed governor of the Calixis Sector by the High Lords of the Adeptus Terra more than one hundred and fifty years ago, and maintains a firm, unflinching grip on the planets under his control. The Lord Sector is a man of immense gravitas and solemnity, a glowering, intimidating presence at the heart of the Lucid Palace on Scintilla. Hax makes few public appearances, and personal audiences are rare. His devotion to the minutiae of leadership is legendary - it is said that he sleeps just four hours a night, and personally reviews the daily fiscal and economic reports in great detail. His reputation in the sector at large is therefore chilly and austere: he is popularly mocked as an unsmiling hardliner and administrative stickler, and also feared as a figure of unsympathetic authority. This widely accepted image, however, misses the essential truth. He is a painfully fair, even-handed man, devoted to the principles of ordered rule. In person, he is tall and granite-featured, and dresses in starkly simple dark robes, eschewing all aristocratic finery. He is over two hundred Scintillan years old, though modest juvenat treatments make him appear to be a robust fifty year old. Hax is not a man to be trifled with, nor underestimated.

The Lord Sector is driven by his convictions, not in the right or even divine authority of the Imperium, but in the absolute necessity of order and obedience for the survival of the human race. Hax cares little for events on individual planets and is even dismissive of happenings on Scintilla (of which he is nominally planetary governor). He cannot be distracted by the fates of a few million citizens here and there and is more concerned with the big picture, levying correct tithes and collecting them, monitoring psykers and rebellious groups (Hax despises rebels above all others, including cultists and witches) and maintaining the conspicuous majesty of the Imperium.

Hax is surrounded by a lavish court populated by representatives and advisors from organisations and worlds across the sector. He values good advisors and is willing to listen to them, as long as they do not overstep the mark and openly contradict his philosophies. Hax has the power to request military assistance from the Segmentum Governor on distant Cypra Mundi, but he is loathe to do so. The Calixis Sector is his, and his presence and the activities of his adepts should be enough to awe its citizens into obedience.