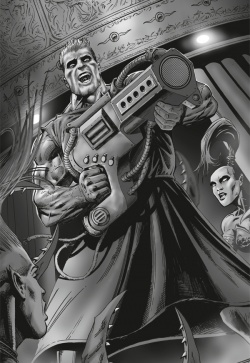 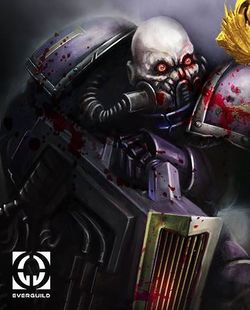 Marius Vairosean as a Noise Marine[3]

Marius Vairosean was the Captain of the 3rd Company of the Emperor's Children Space Marine Legion. Particularly straight-laced and unemotional, Marius' quest for perfection would lead him down a notable path of corruption, the Slaaneshi influence on his Legion and the abominable medical experimentation practiced by Fabius Bile resulting in his becoming the first Noise Marine.[Needs Citation]

A stern, older warrior with salt-and-pepper hair, dark skin and narrow features, Marius often appeared at best expressionless, but more regularly disapproving. Fully immersed in the martial philosophy of his Legion, he expected the best performance possible at all times from all of those in 3rd Company, not least himself. The possibility of not being the best he could be at anything he tried to do made Marius feel physically sick, and as a result he strove for perfection constantly. Marius' exacting nature was particularly notable when applied to the preparation of battle-plans, with his love of preparatory paperwork leading First Captain Julius Kaesoron to quip that Marius would surely be better suited as a member of the Ultramarines (Marius chose to take the remark as a compliment). Particularly serious even for a member of the Emperor's Children, Marius was slow to joke and did not like light talk of things he initially thought of as nonsense, like the concept of gods of battle. A lover of formality and hierarchy, Marius was a proud member of the restricted-entry warrior-lodge of his Legion, the Brotherhood of the Phoenix; a guest-member of the warrior-lodge of the Luna Wolves, he had found the informality and open nature of their lodge discomforting.[Needs Citation]

Vairosean's 3rd Company often supported Solomon Demeter's 2nd Company in the line of battle, with both commanders sharing a friendship as a result. It was an unbalanced relationship however, with Marius finding many of Demeter's actions irritating or unbecoming of an officer of the Legion.[Needs Citation]

During the Cleansing of Laeran, Vairosean and Demeter commanded the initial strikes, with Vairosean later taking principal responsibility for destroying the Laer orbital forces. He was present during the momentous final battle of the campaign, but never made it to the central meeting point laid out in the battle-plan, his Company encountering the fiercest resistance of all engaged units. This perceived failure - despite the success of the overall battle - sent Marius into a self-loathing depression. As a result, he took every opportunity to improve his and his company's abilities, unquestioningly approving the use of the new experimental chemicals issued by Apothecary Fabius.[Needs Citation]

Marius's descent into the embrace of Slaanesh effectively came at the behest of his superiors, his unwavering compliance to the orders of his Primarch and his own need to be better, to be more, eventually leading to him undergoing experimental surgery at the hands of Fabius. Fabius chose to rewire the pleasure centres of Marius' brain, resulting in the previously grim warrior feeling constantly at the edge of experiencing great sensations, every emotion and action - including pain received - stimulating him. Initially Marius found the most joy in expressing anger, but was forced to keep his rage in check, in concordance with the philosophy of the Emperor's Children. He finally found a suitable way of experiencing the sensations he desired after the performance of the Maraviglia, an orchestral work created by the remembrancer Bequa Kynska. Thoroughly corrupted by the powers of Slaanesh, the remembrancer conjured not only daemonic presences upon the stage, she also infused the instruments of the orchestra with the power to produce effects disorientating, stimulating and thoroughly lethal. With the deaths of the majority of the orchestra themselves in the resultant orgy of deviancy, Marius was the first Space Marine to move forwards to lift an instrument and play it, discovering its unusual effects could be directed, and the sensations wielding its power produced. As such, Marius Vairosean became the first Noise Marine.[Needs Citation]

Marius took his weaponised instrument to war with him on the fields of Isstvan V, leading a cohort of similarly armed and stimulated Marines into battle at the Drop Site Massacre. Now completely depraved, Marius had fixed wraps of skin from the Maraviglia dead to his armour with spikes, had his ears removed and his eyes forever sewn open. His mouth was forever unnaturally wide open, contorted by the foul experience of the Maraviglia.[Needs Citation]

Marius would later become the leader of the Legion's Noise Marines, his units being dubbed The Kakophoni. He also became deaf as a result of using his weapons and developed the habit of shouting whenever he spoke, as he could not hear how loud he had become. He participated in the attempt to exorcise the Daemon from Fulgrim, and expressed the willingness to kill Fulgrim rather than let a Daemon have his body.[1]

Marius later took part in the joint Iron Warriors/Emperor's Children expedition to the Eye of Terror and took part in the Battle of The Sepulchre of Isha's Doom. He fought against the Wraith constructs and the attack of the Sisypheum crew and managed to wound Iron Father Sabik Wayland and Dreadnought 'Karaashi' Bombastus before confronting Morlock Terminator Ignatius Numen. Immune to Marius' sonically-enhanced scream due to his deafness - ironically as a result of an earlier attack by Marius himself - Numen simply triggered his Volkite Cannon and erased Marius from existence completely.[2]