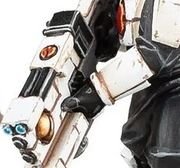 Markerlight attachment on a Pulse Blaster[6]

A Markerlight is essentially a laser targeting system wielded by Tau infantry, mounted on a weapon, carried by a drone and aimed like any other weapon.[1][2][4]

The markerlight itself does no damage, but instead provides targeting information to other Tau units and vehicles. This increases the effectiveness of other Tau units firing at the "lit" target. In addition, the markerlight can be used to give a squad instant support, as when a markerlight is fired, a signal can be sent to a remote Seeker Missile mounted on a vehicle to seek out the painted target and destroy it, completely independent of the vehicle. Each Markerlight has its own unique pulse pattern, which is transmitted to the Seeker Missile's guidance controls prior to launch, to ensure the missile follows the correct beam to its target.[3]

The only downside is that while invisible in normal conditions, it becomes visible when it passes through dense airborne gas or vapour (such as smoke or fog) and in so doing risks giving away the user’s position.[4]