Mars, also known as Sacred Mars[13] or simply The Red Planet[7b], is the fourth planet of the Sol system.[Needs Citation] It is the domain, headquarters, and principal Forge World of the Adeptus Mechanicus.[8a]

Mars is the linchpin of the Adeptus Mechanicus and the greatest repository of technical knowledge in the Imperium.[7a][8a] Martian society is highly stratified, with the lowest level consistent of unaugmented Human citizens who labour en masse at simple tasks. Most citizens aspire to gain status by joining the Skitarii. In the process, they will receive their first bionics. Above these menials and soldiers are the ruling order, the Tech-Priests. The planet itself is ruled directly by the Fabricator-General of the Mechanicum.[7b]

Mars is the home of the mightiest fleet in the Imperium, the Battlefleet Solar; above the equator vast space docks float in geo-stationary orbit. Mars serves as the Segmentum fortress of Segmentum Solar, and is the home world of several Titan Legions, including the Legio Ignatum.[1][2][8a]

Some rumours tell that the C'tan Void Dragon resides deep under Mars' surface. Another rumour says that the Primarch Ferrus Manus survived the Isstvan V massacre and now resides on Mars, though this is strictly rejected by the Iron Hands.[3c]

The Red Planet, as it is called, is acclaimed as a wonder of the galaxy. In the early 22nd century it became the first planet to be terraformed by humans. After being made habitable, the planet was settled by industrial cartels, and it soon developed into the first Hive World and a centre of industry and scientific advancement. During the Dark Age of Technology, the empires of Mars and Earth peacefully coexisted.[2]

During the Age of Strife, Mars endured long centuries of isolation as complete anarchy ripped through Terra.[6a] During the long time Mars was cut off from Terra by Warp storms[7a], Mars's own atmospheric shields gave way, exposing it to deadly radiation that devastated the planet. During this time, fallout shelters represented the only hope for one's survival on Mars. Technology, now responsible for one's very existence, soon became revered and the worship of the Omnissiah began in earnest.[6a] Any humans remaining outside the shelters devolved into cannibal mutants or were wiped out by insane automata and A.I. which stalked the surface.[6b]

Long before the Terran Unification Wars, the survivors on Mars had developed their own culture, guided by the Cult Mechanicus. After battling against many horrors including the Cy-Carnivora[16], they eventually reunited the planet, founding the Mechanicum. As time went on, Mars began to send expeditions to Earth to reclaim lost technology there, and even sent fleets into the void beyond the Sol System to found new Forge Worlds.[6b] Eventually, the Emperor would unite Terra, and established a union with Mars, bringing the red planet back into the fold.[2] During the Great Crusade, the Titan Legions of Mars marched alongside the newly created Space Marines.[2] However, during the Horus Heresy Mars became a key battleground as the loyalist Mechanicus and Dark Mechanicus split. In the resulting Schism of Mars, which devastated the planet, the Dark Mechanicum eventually emerged victorious.[4] After the traitors took over Mars, the Imperial Fists blockaded the world for several years as the Heresy waged, only to be "liberated" by Horus' traitor forces during the final stage of the Solar War.[12] Mars was again claimed by the Imperium after Horus was defeated in the Battle of Terra.[5]

1,500 years later, during the War of the Beast in M32, relations between the Adeptus Terra and Mechanicum degenerated due to the scheming of the then-current Fabricator-General, Kubik. A crisis eventually erupted between the two powers over the custody of Tech-Priest Eldon Urquidex. After a tense standoff, the Fists Exemplar exchanged fire with Skitarii forces before Kubik backed down and agreed to hand over Urquidex.[10]

Mars would again became a battlefield during the North-South Mars Conflict of M34.[9b]

In the 41st Millennium

In the Age of the Imperium, Mars is home to untold billions of servitors and the Cult Mechanicus tech-priests, the devoted servants of its techno-arcane Machine God. The planet is covered in sprawling hives reaching miles into the Martian sky and their foundations delving deep into the planet's core. Orbital factories circle the equatorial belt, their ceaseless industry forming a glowing halo around the planet.[Needs Citation]

In M41, Mars itself would come under attack by a bizarre suicidal Necron raid. Somehow, five Necron Shroud Class Light Cruisers managed to penetrate the formidable planetary defenses of the world. After pursuing the invaders to a mining complex in the northern regions of the planet known as the Noctis Labyrinthus, defense ships were finally able to catch and destroy the Necron vessels, though only to great cost to themselves. Moreover, one ship managed to actually land on the soil of Mars before being vaporized. What the Necrons hoped to gain by this remains a mystery.[3a] 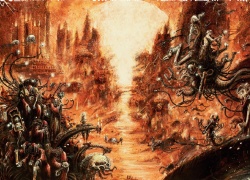 The surface of Mars

Millennia of industry has reduced the surface of Mars to toxic, barren desert.[7a]