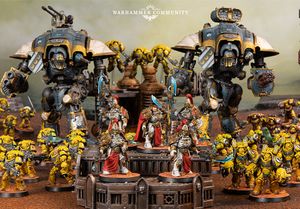 Mars Sub-sector Theta-9 Containment Force is an Imperial strike force[1], that protects an abandoned Forge City in the middle of Mars' Theta-9 Sub-sector.[2]

The strike force's exact reason for being there is unknown, though rumors are that they are containing a threat from the Alpha Legion[1]. They do not know, though, that a band of opportunists, who jealously covet the secrets hidden within the Forge City, are now approaching it.[3]

The Mars Sub-sector Theta-9 Containment Force was created by Darcy Rowley, a Games Workshop employee and they were featured in several Warhammer Community articles.[1][2][3][4]