Masque of the Dance Without End 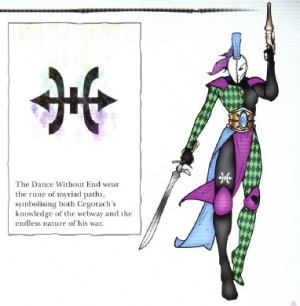 Warrior and rune of the Masque of the Dance Without End

The Masque of the Dance Without End is a Harlequin Company.[1a]

Full of passion and verve, the Players of this Masque are renowned for their performances of the Spiral of Mirth and Madness. This cycle of dances, plays, and monologues recount the deeds of Cegorach himself - an act said to bring these Harlequins closer to their deity. It is said that these Players are so close to the Laughing God that the Webway itself flexes and shifts at their behest.[1a]

The Dance Without End traverse the deepest and strangest reaches of the Webway, often returning to a region known as the Maze of Whispers which has surprisingly survived the Great Rift wholly without damage. They use the maze as their base in their war to save the webway. No other Masque has fought more furiously in the defense of the Webway as the Dance Without End, and they have driven back invading Daemons from the gates of the Black Library itself. They have struck at Necron Dolmen Gates and have butchered Humans, Tyranids, and Orks alike in realspace raids. Any who set foot before a Webway Gate risks the wrath of the Dance Without End.[2]

In 666.M33, this Masque gave the first ever performance of the Fall of the Eldar.[1b]