Masque of the Dreaming Shadow 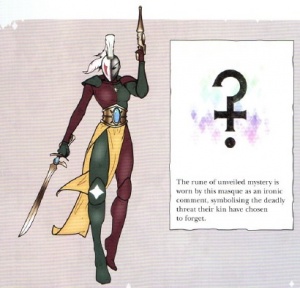 Warrior and rune of the Masque of the Dreaming Shadow

The Masque of the Dreaming Shadow is a Harlequin Company.[1]

It is the ancient duty of this Masque to prevent the awakening of the ancient Necrons, mortal enemy of the Eldar race. Known for their resentment of other Masques, this sentiment is however deliberately exaggerated - part act and part truth, deriving from the fact that the war against the Necrons distracts from the Laughing God's true battle against She who Thirsts. For the most part, other Harlequins hold the Dreaming Shadow's selflessness in high esteem.[1]

The saedath performed by the Dreaming Shadow are almost always led by Troupes of the Twilight, for they stand upon the threshold between life and death. Their ranks are replete with such character such as the Watchmen of the Last Road, the Herald of Heg, and the Lockmistress. They spend much of their time in battle, gracing the halls of their kin only to perform or replenish their ranks. They recruit with great insistence, often against their new comrades will, for they believe their duties transcend desire.[2]

For whatever reason, the Dreaming Shadow have a long history of sudden and seemingly unprovoked attacks upon the Adeptus Mechanicus, particularly on their dig sites. Yet in recent years they have also become allies to humanity, interfering against heretic uprisings, Tyranid invasions, and even Dark Eldar raids. After these instances, it is always noted that shortly after there are always attacks by the Necrons.[2] In recent years the Masque has allied with Alaitoc against the Necrons.[3]