Masque of the Reaper's Mirth 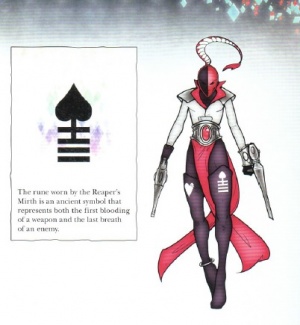 Warrior and rune of the Masque of the Reaper's Mirth

The Masque of the Reaper's Mirth is a Harlequin Company.[1]

This Masque takes the Laughing God's bloody humor to an extreme, making every battlefield a gory canvas. It is not simple enough to kill their enemies - they must be made examples of in the most extravagant manner Because of their penchant for inventive cruelty, they attract a large amount of Death Jesters.[1]

This Masque has a disproportionate amount of Tropes of The Dark and its ranks are thick with cruel and macabre personalities such as Khaine's Wrathful and the Queen of Shards. Yet perversely, almost every Troupe Leader plays a role of The Light. These figures make a great show of dismay at the vicious antics of their followers, acting out exaggerated shock and penitence at the excessive slaughter their Troupes perform. This is in order to remind others of the dichotomy of light and darkness that lurks within their souls.[2]

The Masque went to great lengths to save a group of Exodite Worlds, when they were threatened by a splinter of Hive Fleet Kraken during the Second Tyrannic War. By utilising illusions, feints and the sacrifice of an oblivious Imperium Battlefleet, the Masque was able to draw the splinter fleet away from the Exodite Worlds and into the Webway. Within that mysterious realm, the Harlequins of the Reaper's Mirth were able to destroy the splinter fleet, but payed a high price in blood for their victory.[2]