Masque of the Shattered Mirage 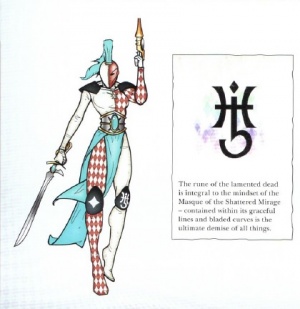 Warrior and rune of the Masque of the Shattered Mirage

The Masque of the Shattered Mirage is a Harlequin Company.[1]

This Masque are ghosts of the Webway and have accepted the doom of their race. Their performances are dark and terrible to behold, conveying fatalistic despair. In battle, they fight with reckless abandon that is horrific to bear witness to, for they have no fear of death.[1] Due to their dark outlook on life, they prefer to fight alongside the Wych Cults of the Dark Eldar rather than their more disciplined Craftworld cousins. It is believed their taste for Realspace raids was fostered by the Shadowseer known as Sh'kira, who once fought in the Wych Cult arenas of Commorragh before realizing her psychic potential and joining the Shattered Mirage. Sh'kira has used her position as Shadowseer to gradually persuaded the Masque to her way of thinking and was instrumental in brokering an agreement with Autarch Zephyrblade, that saw the Masque fight besides Eldar and Dark Eldar forces in the Scouring of Gnosis.[2]

With no fear of death, the Shattered Mirage are intent only on causing as much destruction as possible and often strike at insanely difficult targets where they would fight against ridiculous odds. This has led many of its performers to take up forbidden weapons and calling upon horrific allies to heighten the bloodshed such as the shadow-ghouls of Aelindrach as well as the Haemonculi.[3]

Sometime after the Great Rift was created, the Masque and a rogue faction of the Craftworld Yme-Loc began a campaign to capture the Blackstone Fortress held by the Red Corsairs.[3]