Masque of the Silent Shroud 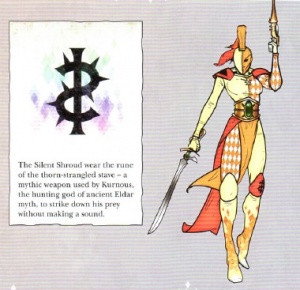 Warrior and rune of the Masque of the Silent Shroud

The Masque of the Silent Shroud is a Harlequin Company.

Acting in absolute silence, their movements are soft upon the air. Even their weapons are muffled through technology and illusion. This often serves to disorient and confuse the Masque's foes. Everything this Masque does relies on secrecy and stealth, and it often appears out of nowhere to stage impromptu performances without need for stage or accompaniment.[1]

The Silent Shroud rarely display any method of communication whatsoever, bringing even their allies to a state of unease. They seem to simply know what is required of them, and seem to always act in perfect concert. Some have described this as a power gifted to them by Cegorach while others have purposed some sort of neurotechnology. Others have claimed that they are merely ghosts of the Webway, trapped forever in the masks they wore in life. Whatever the case, they wage an endless psychological war against the enemies of the Eldar. The Masque in particular focuses against the forces of Chaos, launching terror raids that leave white-haired corpses in their wake.[2]