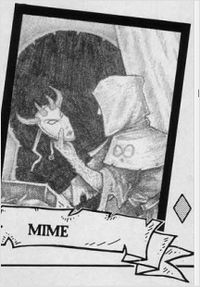 Mimes, also called Distaurs, are a type of Harlequin. Specialist dancers on the stage, Mimes are not permanent parts of troupes, rather kept under the direct control of the Master Mime. They also act as advertisers for the masque, being sent ahead of the company to organise performances. This role is reflected on the battlefield, where they act as infiltrators and assassins.[1]

Master Mimes, also called Athistaurs, are a type of Harlequin. Director of the Mimes of the masque, the Master Mime advises the High Avatar on the technical aspects of warfare and performance, including espionage and politics. On the stage, the Master Mime often takes on the most difficult or leading role.[2]

Mimes and Master mimes were a bespoken unit during the Rogue Trader Era of Warhammer 40k. Rules were published in White Dwarf 105 (UK) pg. 38. The concept was abandonned when Codex: Eldar (2nd Edition) was published. Mimes reappeared as a bespoken unit in Kill Team rules in march 2017 [3]