Master of the Forge 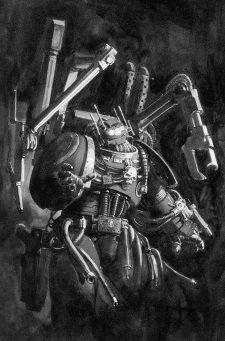 An Ultramarines Master of the Forge[2]

The Master of the Forge is an honoured title with great responsibilities given to the chief weaponsmith of the Adeptus Astartes.[1] He is one of the Masters of a Space Marine chapter.

These senior ranking Techmarines are charged with the maintenance of their Chapter's fleet of armoured vehicles and use their arcane knowledge of science that had been refined over centuries that rivals the most senior Techpriests of Mars.[2] All of the Chapter's Techmarines, Servitors, Techno-mats and the slave workers of the Forge are under his command.[4] Skills of the Masters of the Forge are refined to such an extent that they can determine the ailment of a Machine Spirit with a simple glance and recognise the cause of its intemperance from the whisper of its tortured mantra of function. Such a skill tends to make them somewhat of an outcast within the Chapter even though they are members of the Chapter Council. Despite this being the case, they are seen as outsiders to all but their subordinate Techmarines and are shunned in all matters except the mechanical. This isolation tends to further a Master of the Forge path into eccentricity as they are surrounded either by silent machines or witless Servitors. As a result, their own voice becomes atrophied and on the rare occasions when they do speak, they do so with a clipped, monotone, cold tone that is uncomfortably precise in detail as well as delivery.[2]

Whilst this is generally the case, not all Chapters treat the Master of the Forge in this manner as the Mentors, Praetors of Orpheus and Astral Knights embrace the dwindling technology of Mankind without superstition whilst the Iron Hands relish in it. Amongst such Astartes, a Master of the Forge is an honoured individual that is equal to the Chapter Master himself though these are rare cases. In fact, those that follow such practices tend to be viewed with suspicion by their more conventional thinking Battle-Brothers.[2]

In addition to their responsibilities to the armoury, these weaponsmiths are charged with the responsibility of protecting the many technological relics that fall within the Chapter's care. Among the oldest and more famous Chapters, these can include mechanical wonders that remain sealed within their vaults with most being so complex that no living man is capable of learning their secrets. Others are created from ancient secrets that it requires artisans with a Master's knowledge to be able to use them without harming themselves or others. In times of need, a Master of the Forge is able to take these relics from the vaults in order to unleash the ancient lost technology of Mankind against their foes.[2]

Master of the Rock

The Master of the Rock is a variation of the Master of the Forge used by the Dark Angels. Ominously different from standard Masters of the Forge, upon ascending to this honored position the Master of the Rock follows his predecessors by being permanently wired into the control system of the machine banks of The Rock. It is an important duty meant to placate the most important Machine Spirits, direct the maintenance engines and Warp Drives, and preserve the asteroids force fields. The previous Masters, whose bodies have completely withered, are left in place, their mechanical upgrades still working. Eventually they will be collected for display in the Alcoves of Honor of The Rock.[3]

Because of their dual allegiances to the Chapter and the Adeptus Mechanicus, Techmarines are not inducted into the Deathwing or Inner Circle. This includes the Master of the Rock, who is privy only to the technological secrets and ancient technologies stored about the asteroid base.[3]

The Salamanders have three Masters of the Forge. They assign armored vehicles and artillery to their Chapter's strike forces.[5]

Masters of the Forge are equipped with: Servo-arms, Servo-harness and Conversion Beamers.[2] Some carry the Mortis Machina, a relic Power Axe.[6]

Notable Masters of the Forge