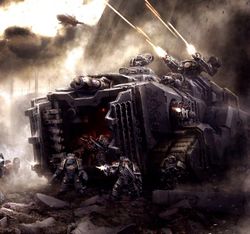 The Mastodon is a Space Marine Heavy Tank used during the Horus Heresy and likely the Great Crusade.[1] The Mastodon was reserved only for assaults on the most heavily fortified positions.[3]

The Mastodon was in use with every Space Marine Legion by the later Great Crusade, but they were used only sparingly.[3] At the outset of the One-Five-Four-Six ‘Kharaatan’ Campaign, the Salamanders had enough Mastodons to transport the entire Legion force present – approx 6000 Legionaries, which would translate into around 150 (or 40 Marines per vehicle).[2]

The Mastodon was a heavy-duty tank far larger than the Land Raider Battle Tank. One of the largest transports of the Legiones Astartes, it was equipped with Void Shields to protect it and its occupants from harm. These power-fields were powerful enough to block Autocannon shells and even Lascannon blasts.[1] As such, they were often used to protect Legionaries on the battlefield from enemy Titans.[3]