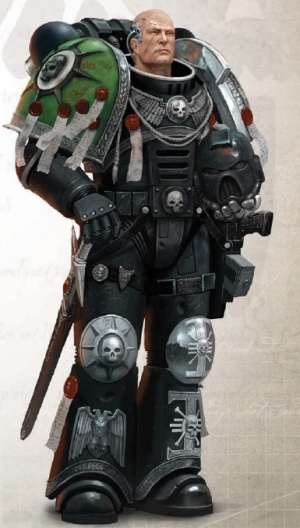 Mathias is a Watch Captain of the Deathwatch.[1]

For two centuries, Watch Captain Mathias has served the Deathwatch. From the battlefields of the Orpheus Salient to the dusty halls of long-lost Watch Stations, Mathias has devoted his service to the tenets of the Deathwatch and their guardianship of the Jericho Reach.[1]

Mathias came to the Deathwatch from the Sons of Medusa Space Marine Chapter for what was to be a decade long assignment. Early during his tenure with the Watch, Mathias was assigned to guard Inquisitor Ramaeus during a tense encounter with a group of Eldar said to have valuable information about the Dark Pattern. The recently-seconded Battle-Brother found himself fascinated by the enigmatic Inquisitor and her mysterious prophecies and after this encounter he devoted a great deal of time to studying all he could learn about them. Mathias was intrigued by the relationship the Eldar seemed to have with the Dark Pattern and he quickly became convinced that these beings knew a great deal more than the Imperium knew about these worlds.[1]

The interest that Mathias displayed in researching the Dark Pattern drew the attention of Inquisitor Ramaeus, who approached the Space Marine and asked him to join her in her pursuit of answers. Mathias was eager to gain access to the Inquisitor’s resources and information, so he quickly accepted her invitation and became the first member of the Dead Cabal.[1]

After joining the Dead Cabal, Mathias quickly rose through the ranks of the Deathwatch, making Watch Captain in only twenty years. He distinguished himself on the field of battle against all manner of xenos throughout the Jericho Reach. He battled Tyranid monstrosities on Credos, unknown xenos on Vormos, and countless Tau adversaries all across the sector. Never once faltering or giving ground, Mathias earned a reputation as a skilled tactician and fearsome warrior. While he never wavered in the face of an enemy, it was the words of a mere girl who shook this mighty lord of battle to his very core. The prophecy uttered by Silexia of Beseritor spoke of a great war to come against the ancients, and Mathias was convinced that he was at the centre of this prophecy.[1]

After hearing the Saint speak, the Watch Captain devoted most of his time to the mysteries hidden within her words. Pouring through ancient texts and forgotten tomes, Mathias worked tirelessly to find all that he could about She Who Has Fallen. Fleeting references and veiled mentions were all that he could find, however, and his search continues to this day.[1]

As one of the highest-ranking members of the Dead Cabal, Mathias has repeatedly used his influence and position to assist other members in securing artifacts and knowledge that the Inquisition and senior Watch leaders would sooner see suppressed. He values this knowledge above any politics and despite any ill will he has gained, and has become a champion for the Dead Cabal. Many of the newer recruits to the brotherhood welcome this change, as it allows them to be better prepared for their battles against the xenos and heretics that populate the Jericho Reach.[1]

Knowing that he may very well soon lay down his life in service to the Master of Mankind, Mathias has begun an extensive search for one to succeed him in the Dead Cabal. He takes a great deal of interest in any who show an aptitude for the ways of the Dead Cabal and a desire to understand the ways of the past. A shrewd judge of character, Mathias is known for making wise choices when requesting Battle-Brothers for the Dead Stations Vigil.[1]