"Let not the fear of death stay your hand nor defeat your courage. The warrior who will prevail is the one who conquers death, who becomes one with death as we have."[9] 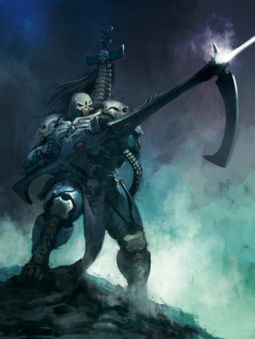 Maugan Ra (literally, "the Harvester of Souls" in Eldar) is an Eldar Phoenix Lord from the doomed Craftworld Altansar.

He is also the brother of Baharroth, like the moon is to the sun.[4]

Maugan Ra is said to be the only survivor from a minor expansion of the Eye of Terror that caught Altansar in its grip and sucked it in five centuries after the creation of the Eye of Terror. Already a mighty Exarch[3], he stayed with his Craftworld until it was dragged into the Eye. When Asurmen taught his brethren the Path of the Warrior, it was Maugan Ra that fell furthest from the fold, after Arhra himself. He took on a dark and sinister demeanor, and focused on a style of warfare that could slay his enemies from afar. As his craft progressed, Maugan Ra learned that even the most outlandish weaponry could be used with high precision, and this skill became known as the Maugetar. This became the founding discipline of the Dark Reaper Aspect itself.[3]

During the 13th Black Crusade, Maugan Ra journeyed into the Eye of Terror and discovered that his Craftworld and its people had survived, even in the perilous domain of the Chaos Gods, and subsequently freed it from the Eye of Terror. He would later marshal the remains of his home to support the combined Eldar effort against the forces of Chaos. Despite the survival of Altansar, there was no celebration for the return of the long-lost Craftworld for its shadowy and curious ten-thousand year survival within the Eye of Terror was regarded with great suspicion and hostility by the majority of the Eldar race.[1]

Maugan Ra's most infamous weapon is a massive Shuriken Cannon known as the Maugetar.[7]