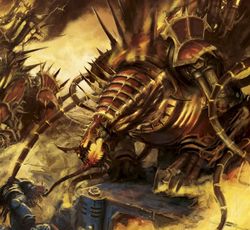 The Maulerfiend is a type of Daemon Engine used by the forces of Chaos.

This disturbing fusion of Daemon-beast and heavily armored machine is designed to attack enemy forces in close combat with gruesome melee weapons as opposed to its cousin, the Forgefiend, which is designed for long-range combat. Maulerfiends can rip apart the strongest armored targets or toughest defenses with a combination of Power Fists, Magma Cutters, and Lasher Tendrils. A Maulerfiend is powered and fulled by the rage of the Daemon that inhabits it, and this amplifies its melee weapons.[1][2][3]

Maulerfiends are extremely agile and nimble for creatures their size, having the ability to climb steep walls. This has given them the nickname of Stalker-Tanks and Scalers. Worse still, they are able to lock onto the scent of a victim, allowing them to hunt the enemy over a great distance. However rather than a hunter, most Maulerfiends serve their masters as daemonic battering rams that crash into enemy lines. Once a Maulerfiend has latched onto an enemy war machine or fortification, it will find even the smallest weak spot to exploit in its armor before crushing or cutting it to bits, allowing them to rip apart the vulnerable individuals or components within.[3] Because of these unsurpassed siege abilities Maulerfiends are used extensively by the Iron Warriors' Warpsmiths.[5] 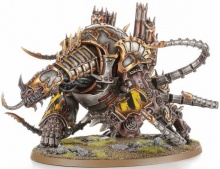