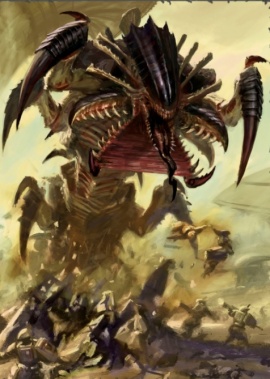 A Mawloc bursting forth amidst a squad of Tau.[1]

A Mawloc is a huge worm-like Tyranid creature that acts as an outrider to the Tyranid swarm.

Similar to Trygons, Mawlocs are burrowing creatures that travel deep underground to bypass enemy defences and then emerge behind enemy lines to run rampant through supply lines, command posts, or artillery batteries, only to vanish back underground to evade retaliation. Severe tremors are the only warning of a Mawloc attack.[1]

Physically, the Mawloc is an incredibly simple organism with most of its bio-morphs geared towards burrowing. It has six incredibly powerful limbs employed to gain traction underground, but they are small and lack the reach to be efficient in combat. Instead, it attacks by swallowing prey whole with its massive razor-toothed maw, or pounds larger foes flat with its muscular tail before eventually devouring them as well. These victims are often digested within its stomach over several long days.[*] Despite its immense size and mass, a Mawloc is incredibly agile and able to weave through incoming fire with fluid grace.[1]

A Mawloc is almost entirely blind, and relies on a series of pressure-sensitive organs that run the length of its flank, which provide the Mawloc with a many-layered and ever-changing picture of the world around it. A Mawloc's senses are so delicate that it can absorb and interpret pressure waves as they travel through both solid and liquid matter. They are able to detect even the slightest tremor, and intercept their quarry with unerring speed and accuracy. Added together, this allows a Mawloc to home in on its prey even whilst burrowing through ground. The more regular and rhythmic the sound, for example, the pounding thump of a terrified heart, the more likely a Mawloc will be able to orientate into emerging precisely beneath its prey. Thus it is a victim's fear that dooms them.[1]

*According to the Ordo Xenos, it is a flight of fancy that anything unlucky enough to be swallowed whole by a Mawloc survives long enough to experience the agony of being digested; such a victim would either be crushed to death by the contractions of its gullet or suffocate within a few minutes - which, as Inquisitor Amberley Vail admitted, "isn't all that comforting."[2] 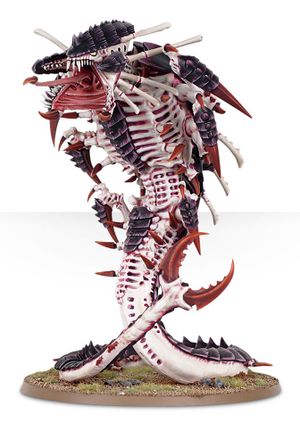