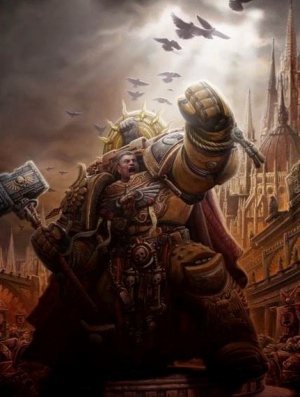 During the last months of the Horus Heresy, Thane was the Captain of the 22nd Company of the Imperial Fists. During the Siege of Terra he led Imperial Fists forces at the Helios Gate of the Imperial Palace under the command of Blood Angels First Captain Raldoron.[12a] During the battle at the Helios Gate he expressed great respect for the common Imperial Army troops who fought alongside him, declaring them true warriors of the Emperor.[12b] Thane later took part in the defense of the Saturnine Gate against the Emperor's Children, battling Fulgrim and his elite guard alongside his Primarch and Sigismund.[14]

At the onset of the War of the Beast, Thane served as Second Captain of the Fists Exemplar. After the death of both Chapter Master Alameda and the First Captain, Thane became the new leader of his Chapter. He represented his Chapter during the meeting of the Imperial Fists Successor Chapters in the Phall System[2], and was the first among the assembled Chapter Masters to submit to Koorland as Supreme Commander of the Last Wall.[3] During the battle against the Ork Attack Moon over Terra by the combined Astartes forces, Thane led a Terminator boarding operation. He reacted aggressively to the subsequent scolding given to him and his fellow Chapter Masters by Lord Commander Udin Macht Udo, dismissing the Imperial Cult as fallacy and defying the wisdom of the High Lords. However he was ultimately subordinated thanks to the mediation of Koorland, who dispatched him on a mission to find the Soul Drinkers.[4]

Thane later reappeared on Mars, leading the Fists Exemplar forces in a standoff that quickly turned bloody against the Mechanicum as part of a dispute over the custody of Eldon Urquidex. He survived the brief but brutal engagement, later leading his forces on Caldera alongside the rest of the Last Wall during the hunt for Vulkan.[5] He next served as the primary fleet commander during the Imperial offensive against The Beast's homeworld of Ullanor, often acting as Koorland's closest confidant.[6] He later accompanied Koorland and the newly formed Deathwatch to destroy the Ork Attack Moon over Terra and again to recover the last surviving Sisters of Silence on Nadiries.[7]

Thane continued to act as Koorland's de facto second-in-command, even as the Fists Exemplar were worn down to less than 70 Battle-Brothers and expressed shock when the last Imperial Fist executed the insane Ecclesiarch Mesring. He desperately led Imperial forces alongside Inquisitor Wienand in the second attempt to slay The Beast on Ullanor using the Sisters of Silence. Koorland died in the battle, and a guilty Thane felt that he should have died in his place.[8]

Thane felt into a brooding depression for a time after Koorland's death, showing little emotion during his brothers funeral and the subsequent Feast of Blades on Inwit. Afterwards however Thane expressed his intent to circumvent the High Lords of Terra to take decisive action and save humanity. He first reestablished the Imperial Fists by having each chapter of the Last Wall contribute a portion of its strength. Becoming the Chapter Master of the newly rebuilt Imperial Fists, Thane next allied with Grand Master of Assassins Drakan Vangorich, Knight-Abyssal Kavalanera Brassanas, and Fabricator-General Kubik in organizing a final push on Ullanor for a renewed attempt to slay The Beast. After having Vangorich coerce Lord Commander Militant Verreault and Lord High Admiral Lansung in supporting the operation, Thane led the third and most brutal Imperial invasion of the Ork capital world. During the invasion, the Sisters of Silence ritual with a captured Ork Psyker succeeded in slaying the "Beast of Beasts".[9]

In the aftermath of the final effort on Ullanor, the Beast's Waaagh collapsed but thousands of systems remained under threat. Thane was reluctantly made Lord Commander of the Imperium after nomination by Wienand and Drakan Vangorich. Thane and his new Imperial Fists returned to Terra to give their final orders, setting the stage of the Fourth Founding of Space Marines. He also named Grand Master of Assassins Drakan Vangorich Lord Protector of the Imperium before returning to the Phalanx to engage in a preemptive Crusade against the enemies of mankind for the next century. From the Phalanx, Thane proclaimed that the Imperial Fists would no longer remained garrison on Terra but instead wage a never-ending offensive against the Imperium's foes. However shortly after his departure, Vangorich undertook a coup known as The Beheading which wiped out all but one of the High Lords. Thane for a time ignored Vangorich's treachery, believing that the brutal but decisive Grand Master could prove useful in stopping the same kind of indecision that had played the High Lords against the Orks.[10]

However after 100 years, Vangorich's increasingly violent behavior could no longer be tolerated and Thane, back from his Crusade, was forced to organize a force of 400 Imperial Fists, Halo Brethren, and Sable Swords for an assault on Terra. During the battle for the Assassinorum Temple, Thane and his forces were assailed by a hundred Eversor Assassins. By the end of the melee only three remained: Vangorich, Thane, and a single Eversor. Vangorich bid his goodbyes to Thane before ordering the Eversor to finish the Chapter Master, but the assassin stayed his hand. The Eversor was Esad Wire, who somehow had overcome his programming. This distraction gave Thane enough time to raise his Bolt Pistol. Vangorich asked if they would like to know the story of how Konrad Curze died before being shot dead by Thane. Of Esad Wire, there was no sign.[10]

Thane continued to retain his title as Imperial Fists Chapter Master after The Beheading and led a campaign to put down many rebellions that erupted after Vangorich's disposal. He also censured the former Black Templar Helbrant Alderic for introducing too much of his original Chapter's methods into the Imperial Fists 8th Company.[13]