Mechanicum by Graham McNeill, published in December 2008, is the ninth book in the Horus Heresy Series. It was later included in "The Novels: Volume 2" eBook collection. The novel concentrates on the civil war within the Adeptus Mechanicus on Mars during the Horus Heresy, leading up to the beginnings of the Dark Mechanicum.

As the flames of treachery spread throughout the Imperium, Horus plots to subvert or destroy all those who would stand against him. On Mars, home world of the Mechanicum priesthood, the great manufactory-cities have long produced much of the weaponry required for the expeditionary fleets across the galaxy — making the world invaluable to whoever controls it in the coming war. Now, the Warmaster's agents begin to stoke the fires of rebellion, turning the loyalist forges and the mighty Titan Legions against one another. And, with whispers spreading of an ancient terror lurking beneath the Red Planet's surface, the Dark Mechanicum rises... 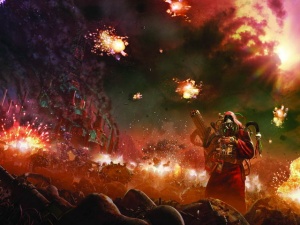