Medrengard is the Daemon World of Perturabo, and the current homeworld of the Iron Warriors Traitor Legion. It is seen in nightmarish visions as a world turned into a vast fortress with mountains of inconceivably high towers and dungeons penetrating into its core.[Needs Citation] 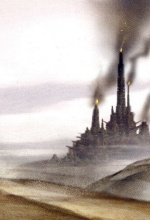 Information gained from reconnaissance within the Eye describe the world as a bleak jail world where slaves are worked to death, with great Chaos warships tethered to its tallest towers, in which reside the Iron Warriors themselves. Warsmiths occupy their own imposing fortresses on the Daemon World, each commanding their own Grand Company and sometimes battling one another in power struggles.[1a] The grandest fortress on the planet is the personal lair of Perturabo[1b]. Other descriptions of Medrengard depict it as a huge fortress world with slave pits and towering pillars. In the white sky a black sun pours smoky threads down onto the surface of the corrupted world. While there appear to be no 'native' inhabitants of Medrengard, the mutant 'the unfleshed' are known to roam the hills and gullies.[Needs Citation]