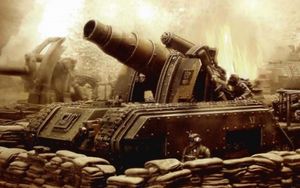 The Medusa Siege Tank is an aging Imperial Guard siege platform used when attacking the thick walls of an enemy-held city or fortress. Built on the Chimera chassis, the Medusa suffers from a number of disadvantages compared to other artillery pieces like the Basilisk or Griffon, but its immense firepower ensures its continued use in the siege warfare depressingly common to the 41st Millennium.[1]

The centerpiece of the siege tank is its Medusa Siege Gun which, unlike other artillery cannons, fires its heavy shells directly into the enemy's fortifications. It does this for days on end, from well-protected positions, until the constant barrage has created a large enough breach for friendly forces to assault through and secure a bridgehead.[1][2a] Beyond this limited role however the Medusa is less of a success. The gun itself is short-ranged compared to the weapons on Basilisks, Manticores, and even Bombards, limiting its use in a conventional artillery role. The Medusa also suffers from ammunition issues as it can only carry eighteen heavy shells; while not a problem during a siege with stable lines of resupply, this limits its endurance when operating in the field. It is viable as an urban assault gun, leveling enemy buildings with a single shot in support of infantry assaults, but such close-range fighting leaves the Medusa's exposed crew too vulnerable to enemy fire compared to the thick armour protecting Demolishers and Thunderers. For this reason many armoured regiments will have at most a battery of Medusas kept in reserve for use only when breaching a wall or assaulting a bunker line, as most commanders will avoid deploying them directly on the frontline if possible.[1]

During the Great Crusade and Horus Heresy, the Medusa was used by Space Marine Legion siege units.[3]

In addition to its Medusa Siege Gun the Medusa is also armed wit a hull-mounted weapon, either a Heavy Bolter or Heavy Flamer. Other standard equipment includes a Searchlight and Smoke Launchers. Common upgrades to the design include an Armoured Crew Compartment, Camo Netting, Dozer Blade, Extra Armour, a Hunter-Killer Missile and/or pintle-mounted Storm Bolter or Heavy Stubber.[2b]