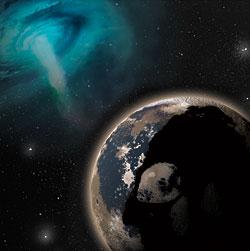 Medusa V before its destruction.

The history of Medusa V is tightly linked with that of its sister planet, Medusa IV. The Medusa System may have gone unnoticed had it not been for the huge Warp Storm named "Van Grothe's Rapidity" located very close to the Medusa System. Medusa IV and V were colonised to provide both resources and a staging post for ships attempting to sling through the relatively stable warp storm, giving them vast improvement in travel times, although at a much higher risk of destruction. When the Explorator fleet arrived, a Clan Company of the Iron Hands came with them to provide tactical assistance in case they encountered any native indigenous life forms. The Medusa System was named in honour of the Iron Hands, a tribute to their own homeworld.[Needs Citation]

Medusa V was only settled in part, as the Iron Hands were called away before the planet could be totally investigated and the Explorator fleet deemed it not necessary to further investigate and colonise the planet. Even though the site had been specially chosen, the system was prone to serious warp storms from the "Rapidity," threatening to envelop the system and cut it off from the Imperium, sometimes for months or even decades. Every time the storms ended, however, and astropathic communication was re-established, the first signal to be received from them was that everything was fine on the worlds.[Needs Citation]

Medusa V's wealth lay in the mining of iridium ore and drilling for promethium, supplying fleet ships in orbit for their long journeys throughout the Imperium. At this time of relative prosperity, there were only a few large cities on Medusa V, the center of production being on Medusa IV.[Needs Citation]

Then came the Medusa Schism. The outcome of the schism was that Medusa IV was abandoned and destroyed by Exterminatus with one salvo of atmospheric incinerator torpedoes (under the watch of Inquisitor Baptiste), which made the oxygen in the atmosphere ignite and destroyed all life on the planet. It is said that the planet glowed for a whole month. Those citizens saved from Medusa IV were transported to Medusa V and screened for heretics by the Inquisition, and thousands were put to death, but that was nothing compared to the vast explosion in the population of Medusa V that the arrival created. Vast structures were erected by the Adeptus Mechanicus to hold millions of workers, kept separate to avoid the spread of any taint the Inquisition might have missed. These cities became known as "refugee cities" and they gradually found their place in society, providing innumerable labour to work the ore extraction mines. A few years later, the planet entered into a production golden age, producing more materials than was thought possible for the planet. It was at this time that it earned its high Aestimare value of A912.[Needs Citation]

Events, however, have a tendency to go badly when things go well for a period. 200 years after the Medusa Schism, the Rapidity began to "boil over" and is growing at an alarming rate. Some believe it to be growing because it is attempting to become a second Eye of Terror. The Ordo Malleus postulate some form of Chaos Sorcerer has worked his magic upon it, but in the end, they are all irrelevant. As it expands, it consumes every waystation and outpost it touches and it is believed that within either months or weeks, it will reach the Medusa System.[Needs Citation]

Even while the authorities attempt to organise an escape and evacuation plan there is turmoil on the surface, mirroring that of the warp storm. Several of the "refugee cities" have openly revolted against the Imperium and the Planetary Governor Soloman hopes that it is simply a reaction to the dire threat they face, although news comes every day of the ever-increasing numbers of revolting areas. The Techpriests who operate the vast orbiting auspex arrays have detected three astronomical energy spikes, the first on Medusa VII and the second and third on Medusa V itself, one far to the south of the planet and the other near Macavius Hive, the second largest Hive on the planet. Rumour has it that the city is under siege from these aliens, although verification has thus far failed to reveal an answer.[Needs Citation]

Three Imperial vessels, part of an Explorator fleet heading galactic eastwards, have been attacked within Medusa V's surveyor range, although when a number of frigates were dispatched to aid them, the ships were found empty of all life, all crew and passengers gone without trace. On the northern edge of the Medusa V continent, over a hundred farms have been destroyed in a spate of barbaric attacks. All the machinery has been looted, including the giant reaping machines. Every day more and more agricultural workers flee to the Hives and the threat of starvation is growing ever stronger. Deathwatch Space Marines have warned that a sizable chunk of the Hive Fleet Kraken has broken its course and has moved to intercept the Medusa system after a titanic engagement with an Imperial Navy space fleet at Lycanis. A Deathwatch Librarian, named Andreas, has postulated that the Rapidity may be acting as a beacon to the Hive Fleet, drawing it to the system. A full-scale invasion will soon begin, adding to the bedlam already reigning on Medusa V.[Needs Citation]

Governor Soloman has turned to the Sector Command, who brought matters to the attention of the Inquisition. A cell of Inquisitors was immediately dispatched to Medusa V and they arrived some weeks later to find the main Hive city of the planet, Hive Euyrales, having already plunged into revolt and the Governor's own personal guard and the Adeptus Arbites fighting a desperate defence against the traitors. The Hive had openly pledged its allegiance to the Chaos Gods and rumours are abound that the Traitor Marines themselves have come to Medusa. The Inquisition made a wider call for assistance, managing to contact Ultramarines Captain Sicarius of the Second Company. Dozens of Space Marine chapters race to the system, having pledged their support, as well as an Imperial Guard crusade lead by Lord Marshal Graf Harazahn of the Vostroyan Firstborn. Every day the xenos grow bolder and push the defenders further back. The Imperium simply refuses to let the world fall to the hands of their enemies for even a single day's production is more than worth the sacrifice in manpower. Whatever happens, the Warp storm will destroy the planet.[Needs Citation]