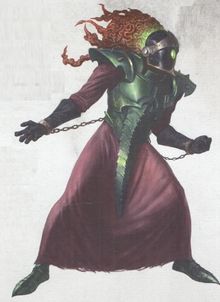 Medusae are strange creatures of the Webway that often find themselves as servants within an Archon's court and are quite sought after by the denizens of the Dark City of Commorragh.[1]

Medusae are known to be highly empathic parasites that appear as a collection of brains and spinal cords that are stacked on top of one another. These creatures seemingly float across the ether like jellyfish where they feed on the dreams, as well as nightmares, of sentient beings. They can also latch upon a living host, allowing them to feed upon the emotions of their host directly and through this process, provide the power they require to manifest in realspace, thus becoming hybrid creatures of both the material world and the Immaterium.[1]

In combat, their empathic abilities are weaponised: a simple gaze from a Medusae can lead to instant emotional hemorrhaging by exposing their victims to raw anguish, potentially putting them into a coma from which there is no recovery. In addition, they are also able to absorb extreme sensations, which are highly prized in Dark Eldar society. The brain fruit of the Medusae are capable of being consumed and allow an individual to re-experience the vivid and anarchic emotions of a raid all over again.[1] 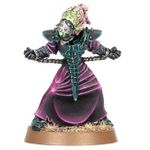