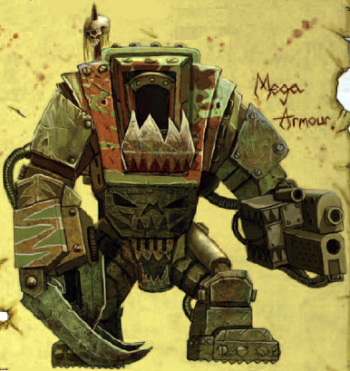 Mega armour is the heaviest variety of Ork Armour, a suit of massively thick and heavy armour over a powered exoskeleton.

Its weight (a ton or more) and complexity make it difficult to move and slow down its user, but it can withstand insane amounts of punishment, almost as much as Imperial Terminator Armour. Piston-enchased metal limbs of mega armour give the wearer phenomenal strength, and it incorporates fearsome weapons: a Power Klaw and Kombi-Weapon or twin-linked Shootaz. It often involves the use of built-in bionics and is very complex, which makes it very hard to manufacture, so it is a rare sight in Ork armies. Usually only Nobs (who like to call themselves "Meganobs" after acquiring Mega Armour) and Warbosses can afford such armour.[1b][3a]

Mega Boostas are Ork devices which are attached to units of Mega Armour and generally increase the power available to the suit. This allows the Ork a better chance of getting to a fight quickly as the suit has the possibility of moving fast enough to keep up with the rest of the boyz. This can sometimes lead to sections of a unit of Mega Armoured Nobz moving more quickly than others, if only some of the Nobz have Mega Boostas.[3b]