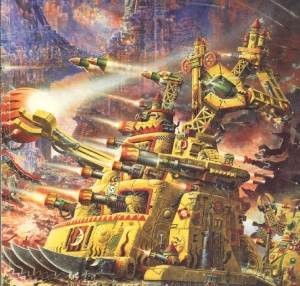 Mega Gargants are the largest class of Ork Gargants, colossal Titan-class machines of war that the Ork race considers effigies to their Gods Gork and Mork.

Dwarfing even Great Gargants, Mega Gargants rival the size of an Imperial Imperator Titan, bristling with enormous guns, missiles, and other types of outlandish weapons of mass destruction.[1c] By Ork standards, Mega Gargants are extremely complicated machines that only the most brilliant Mekboy can engineer, and are among the most devastating Ork weapons, deployed only for the largest Waaagh!'s. Though they can be equipped with advanced equipment like Krushas, Gaze of Mork, Skullkrusha Mega-Cannon, Kustom Force Fields, Gut Busters, and Lifta-Droppas,[2] just like most Ork technology the Mega Gargant is extremely crude and lack the scientific sophistication of human or Eldar Titans.[1b] 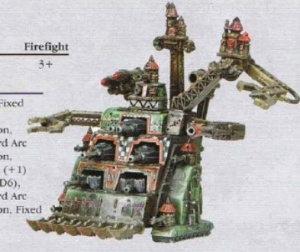