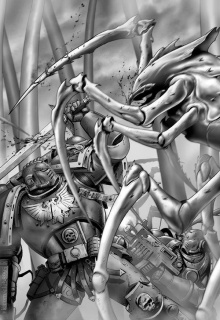 The Megarachnids were a fearsome and violent Xenos race encountered by Imperium during the Great Crusade era. They resembled arthropods in various forms.[1a][1b] - so-called Clades[1d]

In the distant past, the Megarachnids found a way to the interstellar travels and even infested eight systems until the Interex civilisation found them and after a terrible war Megarachids were ultimately defeated. Rather than exterminate their foes, the benevolent Interex exiled the Megarachnids to the planet Urisarach and denied from them all means of interstellar travel.[1f]

During the Great Crusade, the 140th Expeditionary Fleet discovered Urisarach (dubbed "One-Forty Twenty"), and, ignoring the Interex's orbital warning beacons, descended to the surface to effect compliance in the name of the Imperium.[1c] Then all contact with the 140th ceased, save for a lone distress call from Blood Angels Captain Khitas Frome, which ended "This. World. Is. Murder".[1a]

The Imperial forces that responded to the distress call included the 63rd Expeditionary Fleet under Warmaster Horus, a detachment from the Emperor's Children under Lord Commander Eidolon,[1a][1b] and a relief force from the Blood Angels, led by Sanguinius himself. The War on Murder as it was dubbed,[1e] took six months,[1g] and all three forces suffered serious losses, but eventually the Megarachnids were defeated.[1e]

The war on Murder inadvertently led to the Imperium's first contact with the Interex, who arrived shortly after the war ended, in response to signals from their orbital beacons, and rebuked the Imperials for ignoring their warnings.[1f] Due to a sudden contact with the Interex civilization, Horus was forced to curtail his campaign against the Megarachnids and withdraw troops from the planet.[1e]

The Megarachnids of this clad possessed long sword-like claws that appeared to be made from an organic metallic substance, and lived and worked in large swarms. The ground sub-species of the Megarachnid Warriors resembled spiders and were three metres tall, had eight limbs and were segmented like an insects. They used their four upper limbs as a weapons - each was over a metre in length beyond the joint and resembled a sword that easily cuts through ceramite. Megarachnids were clad in a thick chitinous carapace that was very hard and resilient.[1a]

Their bodies were heavily augmented through a technological or biological process that, according to Captain Saul Tarvitz, made it impossible to discern where their bodies ended and their weapons began. His fellow Captain, Lucius, appropriated a severed Megarachnid's claw as a second sword, but its edge was so keen that he cut his hand just by holding it in his ceramite gauntlet.[1a]

The flying form of Megarachnids resembled a giant wasp with sinious black body, eight legs and a sinister hook on its head, which can break any armor. These sub-species were also clad in a hard carapace.[1b]

Megarachnids also had other clad variants: bigger massive form with short thick legs and gigantic abdomens which consumed the broken scraps of the broken or damaged "trees" (see below) and turned them into fresh new materials. The smaller quick clades took this fresh new material and formed a substance like gelling concrete for the building of new "trees".[1d]

Another clad represented massive winged Megarachinds that attacked the Space Marines like some kind of armoured war machines.[1e]

The Megarachnids grew forests of "trees" from a hard, stone-like substance all over the planet's surface. First Captain Tarvitz thought that they were used just for feeding ground of the winged sub-species of Megarachnids (they pierced the wounded and killed Marines on the thorns of trees, then to eat their bodies)[1b] but after he insisted on destroying one, he discovered that the trees were generating the electromagnetic radiation that disrupted vox communication and drop pod telemetry, and also caused severe weather storms that confounded the attacking Space Marines.[1d]