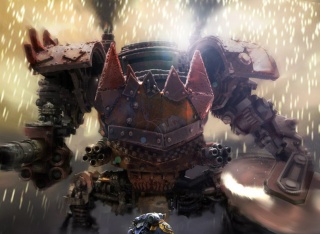 The Mega Dread is a heavy Ork walker and is the largest Ork walker short of a Stompa.

The Mega-Dread is a hulking, armor plated monster, much larger and considerably more powerful than the more commonly encountered Deff Dreads and Killa Kans. They fit enormous hydraulic power into a relatively compact frame, which makes them far more maneuverable on the battlefield then the larger Stompa. Mega Dreads are usually armed with a combination of Kill Kannons, Claws, and other high-caliber weapons. Being larger and more sophisticated then standard Ork walkers, most Mega Dreads are controlled by a hybrid system of detachable surgical implants which are often hammered in then pried out of the pilot's head during and after battle. To the Mekboyz that are able to build these monstrosities, they are the ultimate killing machines and a Warboss can expect to pay a hefty amount of teef to acquire them.[1]

Meka Dreads are modified Mega Dreads that replace its Big Shootas with large Servo-arms equipped with tools for battlefield repairs and 'fixin' jobs.[2]