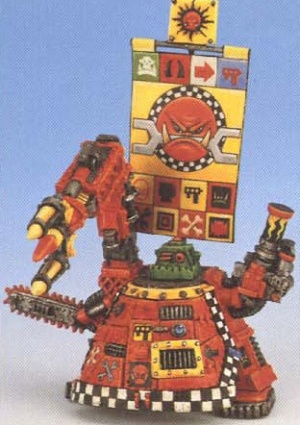 Mekboy Gargants are Ork Gargants built personally for a Mekboy, as opposed to the more common practice of a Mekboy building such a machine for a powerful Warboss. Often built at the last minute before a Waaagh! is launched when a Mekboy realizes he doesn't have any big weapon for himself, Mekboy Gargants are constructed at desperate speed from whatever scrap metal he can find. Though a Mekboy Gargant may not be as big as a Great Gargant or Mega Gargant, its Mekboy owner still considers it special and 'kustom'.[1a]