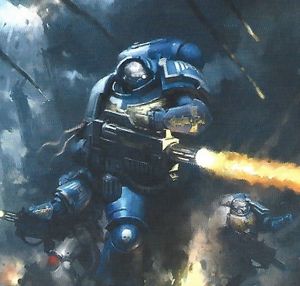 Melta Weapons are potent weapons which work either by sub-atomic agitation of the target causing it to cook or otherwise melt, or by creating a small scale fusion reaction (using a Pyrum/Promethium fuel mix for some imperial weapons), which is projected as a blast which can burn through almost anything, with greater effect the closer to the target.[9]

Although short-ranged and slow to fire, they are prized for their power against armoured vehicles. They are also considered a good alternative to plasma weapons, which are unreliable and capable of killing their user. Besides the roar of the explosive vaporising of the target's moisture, melta weapons themselves make little noise when firing. Given their fairly quiet and very effective nature, infiltrating parties make use of melta weapons to destroy enemy vehicles before they get a chance to fight on the battlefield.[1a]

Many races make use of the same basic technology. In the Imperium they are called meltas, and often referred to as 'fusion guns', 'melters', 'cookers' and 'vape guns'. Equivalent weapons used by other races have similar effects, although sometimes completely different technology and methods of operation. Both the Tau and Eldar use melta weapons, primarily for tank hunting like the Imperium.[1a]

Main article: Meltagun
The Meltagun is the most commonly seen melta weapon in use by the Imperium and is commonly found throughout all of the Imperium's fighting forces including the Imperial Guard, Space Marines, Ordo Hereticus and Adepta Sororitas.[1a]

Main article: Multi-melta
The Multi-melta is a heavier version found primarily on vehicles and occasionally carried by Space Marine Devastator squads and Sisters of Battle.[1b]

Main article: Inferno pistol
The Inferno Pistol is a very rare and smaller melta weapon, used only by the agents of the Inquisition (Ordo Hereticus and Ordo Malleus) and a select few Space Marines (Commander Dante of the Blood Angels Chapter).[11]

The Melta Cannon is a large vehicle-mounted melta weapon, able to destroy several targets at once. It can be found on the Devil Dog, a variant of the Hellhound. An even larger version of the Melta Cannon is mounted on several classes of Imperial Titan.[3][4]

Main article: Magna-Melta
The Magna-Melta is an ancient Melta weapon originally developed for space combat, but has since found use on vehicles such as the Deimos Pattern Predator Infernus[7]

Main article: Fusion Gun
The Fusion Gun is an Eldar weapon used by the Fire Dragons Aspect and Storm Guardians.[12]

The Inferno Lance is an enormous Fusion weapon used by Eldar Wraithknights.

The Fusion Cascade is a newly developed Tau weapon which fires in bursts. Due to the increase in amount, the power of each shot is less than the Imperial equivalent. It is equipped on the new Battlesuits.[13]

The Fusion Collider is a heavy Battlesuit-mounted anti-tank weapon.

The Fusion Eradicator is the largest and most powerful class of Tau Fusion Weapon.

Main article: Heat ray
The Heat Ray is a Necron weapon mounted on Triarch Stalkers and capable of anti-tank and anti-infantry modes of fire.[5]