The Mentors (or Mentor Legion[1]) are a loyalist Space Marine Chapter.[2] 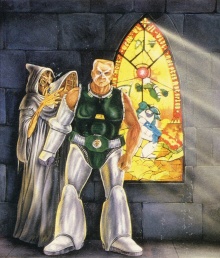 Commander Nisk Ran-Thawll[7]
The Mentors are a secretive chapter, who prefer to work alone. They are untrusting of other chapters. Currently, they are in battle with Biel-Tan Craftworld Eldar and Orks of the Charadon System.[2] On their founding they were designated with the chapter number of 888, a number previously belonging to the Star Scorpions Chapter. The Star Scorpions were a Chapter of the Twenty Fifth Founding and had the dual misfortune of producing redundant gene-seed and being devastated by warp entities after becoming lost in the warp. Although what exactly happened to the Chapter is unknown, the Emperor decreed the Chapter be considered dead. The gene-seed of the Star Scorpions survived, although the mutated gene-seed made Adeptus Mechanicus efforts to rebuild the Chapter futile.[Needs Citation] 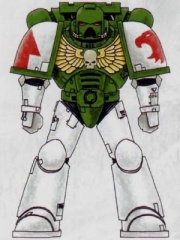 During the Twenty Sixth Founding, the Adeptus Terra assigned one of the newly created chapters (the Mentor Legion) with the colors and number of the Star Scorpions. The Mentors were given an entirely new generation of genetic material collated from the storage banks of the Terra laboratories.[Needs Citation] The Mentors are a specialist Chapter and their modus operandi is quite different from that of the bulk of the Adeptus Astartes. The Mentors have an extraordinary capacity for learning, particularly of military matters. Because of this, the chapter's main pursuit is perfecting the fusion between science, the art of war and military technology. The Mentors do not engage in campaigns or wars as other chapters do, but instead "loan" squads of Marines to other Imperial forces for the duration of a battle or sometimes a whole campaign. Squads of Mentors may be found fighting alongside the Imperial Guard or even other Chapters throughout the galaxy.[6]

The basic rationale behind squad loaning is that the Mentors are able to extract the maximum amount of information regarding the fighting prowess and techniques of just about any Imperial military organisation. "Loaned" squads returning to chapter HQ bring with them an invaluable record which is without parallel in the galaxy. The chapters and armies to whom these squads are sent benefit from having these superior warriors join them for a campaign or battle. An extra benefit to the Mentors is that they are also able to claim and maintain an honourable record of real combat experience. Even in the short period of the Chapter's existence, they have amassed an enviable Roll of Honour.[Needs Citation]

A large proportion of the chapter is permanently based at their secret headquarters, the rest sent out on missions. The based Mentors perform rigorous training and disciplining. The chapter is exhaustively trained in the art of war and in the use of Imperial military hardware, both old and new - the Chapter acting as a testbed for the latest Imperial technology. The Elite Cadre of the Mentor Chapter are the most advanced warriors of their kind in the galaxy. It was originally envisaged that the Elite Cadre would perform a number of important semi-military roles, from counter-terror operations to complex undercover missions. They would be capable of dealing with threats outside a normal chapter's field of expertise. This aim has not yet been realized, but the elite Cadre are among the best the Imperium can deploy.[Needs Citation]

There are two ways Imperial commanders use them on the battlefield when they are loaned to them. First the cadre element may simply be used as a powerful squad, gaining the benefits of their special equipment; alternatively, they may become leaders for other units. The latter is preferred by Imperial Guard commanders as the Elite Cadre make especially good leaders for units of normal warriors. [3]