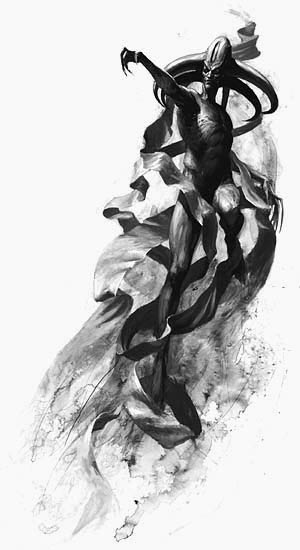 Mephet'ran, the Deceiver is a C'tan, a living god of the Necrons, that survives as fragmented shards.[3]

The Deceiver, as its name implies, enjoys using trickery, deception and lies to its own ends.[1e] The other C'tan quickly learned to distrust and shun the Deceiver[1e], and its nature was shown particularly when the Deceiver tricked the Necrontyr into giving up their bodies in favour of metallic husks.[1e] When the Necrontyr first encountered the Deceiver, they gave it the name Mephet'ran, the Messenger and hoped it would be able to bridge the gap between Necrontyr and C'tan.[1f]

The Deceiver was the one to steer the Necrontyr towards a war with the Old Ones, by using its words to instill hatred of their power and ageless wisdom. Eventually this led to the transformation of the Necrontyr to the Necrons, which in turn led to the next major incident in the history of the C'tan. One of the three possibilities says that the Deceiver was the first to set C'tan against C'tan, convincing them that each other was the "best of all feasts", but despite this the Deceiver remained one of the physically weakest C'tan and only survived by avoiding the more violent C'tan, such as the Nightbringer and the Void Dragon.[1f]

The Deceivers same deviousness proved to be its undoing. Word spread of its manipulations, and its reputation became tarnished. During the Necron revolt led by Szarekh, the Deceiver was beset by singing spheres unleashed by its servants that wrought it apart into shards.[7] The remaining shards of the Deceiver believe themselves to be in control, fighting alongside the Necrons in order to manipulate them.[4]

The Deceiver and other races 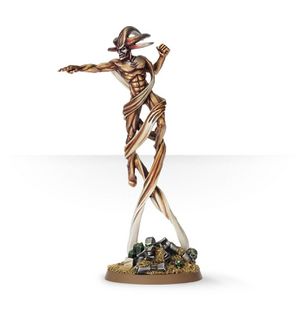 A Shard of the Deceiver[5]

The Deceiver is known by various names by various different cultures:

The Deceiver in Soulstorm

The Deceiver was the last of the C'tan to descend to its stasis tomb and the first to leave, and has had millennia to gather support. It has destroyed, through its subtle methods, the Blackstone Fortresses, the only weapons capable of destroying the C'tan, and placed the remains far out of reach of the Eldar. It is said that it provoked the Gothic War simply to destroy or remove the Fortresses.[Needs Citation]

An article by Farseer Maechu of Ulthwé makes a brief prediction of the future, of how the Deceiver will blur the sight of the younger races and mankind and will make them believe they are coming home when in fact they are walking into the Necron "soulforges".[1h]

Translation of an Eldar Artifact

This artifact tells of the signs of the return of the C'tan. It has one line dedicated to the Deceiver, "...and the Jackal-God shall turn brother against brother."[1a]

Another text mentions the attempt by a Callidus Assassin to assassinate a Planetary Governor named Takis. She used her C'tan phase knife and attempted to kill Takis, but she failed and her weapon passed straight through him. He knocked her aside and took her weapon and absorbed it into his hand.[1b].

The Silvae were an agrarian society with little technology. They were visited by the Deceiver early in their development and it convinced them to worship it. It returned occasionally to reinforce their devotion and they quickly became a superstitious people.[1f]

The Silvae were then introduced to the Imperium and they soon turned to violence, but the Deceiver did not show up to help them. Instead it was dismayed to find them "slipping back to barbarism." It then sent in a Necron force to wipe out all of the Silvae; a few Silvae survived the near-extinction of their race, but there is insufficient genetic variation in these remaining members to perpetuate the species.[1g]

The Deceiver after the fall of Cadia

A powerful shard of the Deceiver managed to assume the identity of Omegon and to trick the scattered war-bands of the Alpha Legion to follow his orders. The C'tan took shelter in a former necrontyr world in an uncharted area at the center of the galaxy. Such world was cave and riddled with Necron pylons. The Deceiver aimed at using the Alpha Legion to create more pylons to close the Cicatrix Maledictum and trick humanity into using the "soulforges" as the Necrontyr did before. The Alpha Legion space marine Occam the Untrue revealed the true identity of the C'tan and engaged him in battle with forces of Alpha Legion and Word Bearers possessed space marines. The Deceiver was powerful enough to annihilate most of his enemies and to destroy an orbiting Alpha Legion spaceship that had bombarded him. Finally, Occam used a tesseract labyrinth to imprison the C'tan shard. The Alpha Legion soldier now plans to question the Deceiver about what he knows regarding the current whereabouts of Omegon.[2]

Another shard of The Deceiver endured on the world of Serenade, having long since possessed the body of the famed Necron Overlord Nephreth. Weaving a tale of Nephreth's immunity to the Necrontyr's diseases and defying biotransference, in truth the Deceiver possessed Nephreth's body as a child and used him as a form of controlled opposition to draw out foes to the C'tan. This Shard was eventually imprisoned beneath Serenade, but by controlling Ammunos Dynasty proxies such as the Cryptek Vishani was able to keep the legend alive in the hopes a treasure hunter of Nephreth's tomb could set him free. Trazyn the Infinite and Orikan the Diviner were both manipulated into freeing this Shard of the Deciever, which was among the most powerful yet encountered and consisted of 5-6 individual shards.[6] Trazyn was able to transform Orikan into a being of light to defeat the Deciever, and the remains were imprisoned on Trazyn's world of Solemnace. Trazyn has now begun to trade energy for information from the Deceiver on how to enter the Great Rift.[6a]

Prior to the publication of Codex: Necrons (5th Edition) the C'tan were described as having been in an aeons-long slumber from which they are only now awakening, rather than having been shattered into the C'tan Shards. Since this retcon, the status of some older information is uncertain.