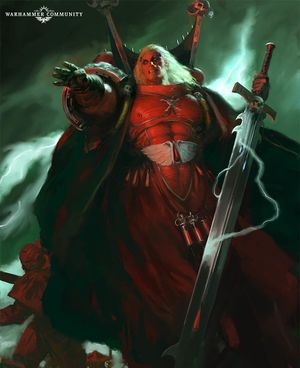 Mephiston is the Chief Librarian of the Blood Angels and the only Blood Angel ever to overcome the Black Rage. Before taking the name of Mephiston and the title of Lord of Death, he was originally known as Brother Calistarius.[5]

Originally known as Calistarius, he was a Blood Angel Librarian of some ability and exceptional strength of character.[5]

While holding the rank of Lexicanium, Librarian Calistarius was present during the boarding of the Space Hulk Sin of Damnation as an honourary member of the Blood Angel's 1st Company.[2]

While fighting as part of the relief force for Hades Hive during the Second War for Armageddon campaign, Calistarius became a victim of the Black Rage. After being inducted into the Death Company, he took part in the assault on an Ecclesiarchy building and was one of many trapped inside when the building collapsed during battle. For seven days, Calistarius lay trapped in the rubble, teetering on the edge of death and madness. Somehow, rather than succumbing to the Red Thirst, he managed to conquer it. By sheer strength of will he was able to suppress and hold in check the feelings of rage and the desire for blood, and in doing so he became something more. On the seventh night he burst free of his rocky tomb, reborn as Mephiston, the Lord of Death.[6] 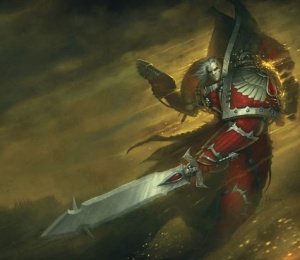 Mephiston, the Lord of Death[4]

Mephiston's resurrection did not go unwitnessed. By this time Hades lay once more in the hands of the Imperium, but Orks still roamed the ruins. As Mephiston heaved debris aside from his tomb, the sound of tortured stone drew the attention of one band of Orks. Weaponless, and with his armour shredded and mangled, Mephiston must have seemed easy prey, but nothing could have been further from the truth. His gene-seed, dormant these many long years, had awakened and wrought further changes, granting exceptional strength and vigor. Moving with a speed the Orks could not match, Mephiston unleashed a flurry of attacks, every blow pulverizing flesh and shattering bone. Five Orks died in as many seconds, and a dozen more swiftly followed. The greenskins never stood a chance, but they were as stubborn as Mephiston was determined. It was not until the reborn Angel punched clean through the biggest Ork's chest and tore out his heart that the survivors fled. His ruined armour slick with the blood of his foes, Mephiston began the long walk to Imperial lines.[3]

The changes of his rebirth have affected Mephiston greatly. His powers have grown considerably, but there is also a downside. He has absorbed the Warp personification of the Black Rage, a Black Angel of pure rage and darkness. This creature is a dark fragment of Sanguinius' soul and vents its rage through Mephiston.[10b]

In the year 977.M41, the Daemon M'kar trapped Mephiston in the crystal caves of Solon V. He then attempted to lure Mephiston into joining Chaos as a renegade, claiming that Mephiston was already firmly on the path to Daemonhood. Mephiston rejected his captor's claims and throttled the life out of M'kar[3].

Shortly before the Devastation of Baal, Mephiston suffered repeated dreams of the Bloodthirster Ka'Bandha, hated foe of the Blood Angels, appearing to destroy his chapter. Determined to prevent this, Mephiston and his disciples Gaius Rhacelus and Lucius Antros journeyed to the Cruor Mountains on Baal to undertake a ritual to open up a portal to Khorne's realm and kill Ka'Bandha before he could be a threat. The ritual however was ultimately flawed, and a cave-in trapped the Librarians for the rest of the battle.[7]

At some point following the Devastation of Baal, Mephiston was converted into a Primaris Space Marine.[8] During the procedure Mephiston nearly died, but found himself in the Warp and came before the Sanguinor and Black Angel. An apparent avatar of Sanguinius appeared and told Mephiston that he is doomed to become the Black Angel, but if he accepted the entity into his body now it could act as a prison and weaken the Black Rage within the chapter for a time. However this would come at the cost of becoming a pariah and damning his soul. The Chief Librarian apparently accepted, displaying dark new abilities and stating he both is and isn't Mephiston. Against the wishes of Astorath Dante decided to not execute the reborn Mephiston.[11] Now a Primaris Marine, during the Psychic Awakening Mephiston used his psychic abilities to aid the Blood Angels during the Angel's Halo Campaign.[9]

Mephiston has become embroiled in an effort to foil the plans of Magnus the Red and the Daemon Prince Zadkiel. Foreseeing disaster should their plans come to pass, he managed to infiltrate the Planet of the Sorcerers and foil the attempts of Zadkiel to summon nine Silver Towers to Terra.[10a]

Mephiston is armed with the Force sword Vitarus and a Plasma pistol. He wears Artificer armor, which incorporates his ornate Psychic hood. Overcoming the Red Thirst enabled Mephiston to release his full psychic potential and he is able to call on any number of psychic powers related to the Blood Angels.[1]

Since his rebirth, Mephiston's powers have grown significantly. He is capable of projecting his mind into even psychically attuned Eldar, driving them to rage and madness.[10c] He can split his soul into multiple dopplegangers, allowing him to do multiple feats at once.[10d] He is capable of stopping and even reversing time, but this power is alluring and potentially dangerous, as he still ages within the paused periods and could potentially waste his entire life while the universe remains frozen in place around him.[10b]