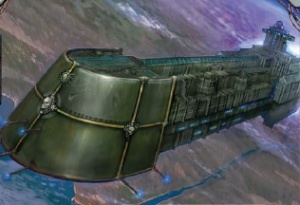 The Merchant Fleets are one of the three components of the Imperial Fleet, along with the civil fleets and warfleets.

The Merchant Fleet is one of the oldest organizations in the Imperium, predating the Emperor's domain and dating back to the Dark Age of Technology itself when the original Merchant Charters were issued as part of Humanity's expansion into the Galaxy. Unlike most Imperial organizations which constantly attempt to police and control humanity's domain, the Merchant Fleet deals only in trade and as a result is supremely wealthy.[4] The combined merchant fleets compose almost 90% of all the interstellar spacecraft in the Imperium. Each fleet is based in one of the five Segmentae Majoris, and its administrative staff operate from the Segmentum Fortress. Although these fleet bases are huge ports equipped with docks, shipyards and repair facilities, their main function is to administer the fleets operating within their area. Only a small proportion of ships ever travel to the Segmentum Fortress where they are theoretically based.[1] The overall headquarters of the Merchant Fleet is located at the Nexus Axiomatic on Terra.[4] Within the Nexus work the Magister Calculo Horarium which coordinate shipping travel across the Imperium.[4a]

Each merchant ship serves its fleet under an arrangement called a Merchant Charter.[2] Not all charters are the same - some confer more power and responsibility to the ship's captain than others - but all types take the form of a feudal oath sworn to the fleet authorities on behalf of the Emperor. A captain may not register his vessel with the fleet authorities until this oath has been sworn and a record of it entered at the Segmentum Fortress for that zone and on the Segmentum Fortress on Mars.[1]

One of the positions in the Senatorum Imperialis is sometimes held by the Speaker for the Chartist Captains. Though an unassuming position, the Speaker is both tremendously wealthy and powerful, for it is they who can devastate entire Sector's simply by halting merchant trade. The Speaker commands the armed wing of the Merchant Fleet, the Praeses Mercatura.[4]

Rogue Traders do not fall under the purview of the Merchant Fleet, making them one of the few shipping entities not under its grip.[4]