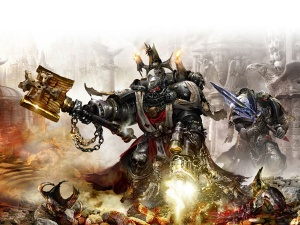 Reclusiarch Merek Grimaldus is a veteran of a score of successful Black Templars Crusades.

The Chaplain was raised from his Marshal's Sword Brethren and inducted into the mysteries of the Reclusiam after the Battle of Fire and Blood. Such was his faith and devotion to the Emperor that the Chaplains saw in the young Grimaldus the making of a powerful warrior priest.[2]

He took his vows before the broken Sword of Dorn aboard the Battle Barge Eternal Crusader and has since justified the Chaplains' faith, zealously leading the warriors of the Black Templars in battle.[2]

High Marshal Helbrecht charged Grimaldus to lead one of the three Black Templars Crusades that had been dispatched to Armageddon, specifically, to Hive Helsreach. They were besieged by millions of Orks, who attacked from land-side but also from a vast fleet of submersibles launched from the icy Deadlands far to the south. A great horde of Ork attacked the Temple of the Emperor Ascendant, a vast basilica that had stood since the earliest days of colonisation, and was held at bay for nearly two months before they finally penetrated the temple precints, looting and destroying priceless holy relics as they went. The Imperial Guard units and the hive militia fled, but the Black Templars refused to yield. The battle degenerated into bloody melee combat in the heart of the temple, where Grimaldus bellowed his now famous cry: "I have dug my grave in this place and I will either triumph or I will die." The battle only ended when the entire Temple collapsed. All were thought lost, but a day later, Grimaldus crawled out from underneath the ruins, carrying the last relics of the Temple. Apothecaries who later treated Grimaldus' wounds claimed that it was a miracle that he still lived, let alone had the strength to crawl from the rubble of the destroyed Temple.[1][2]

Upon commencement of the Season of Fire, Grimaldus was given the title "Hero of Helsreach", the greatest honour its inhabitants could grant.[1]

Chaplain Grimaldus of the Black Templars with retinue