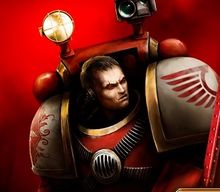 Meros was an Apothecary of the Blood Angels Legion during the Great Crusade and the start of the Horus Heresy. Serving as a "Junior Medicae" or squad level apothecary, Meros served in the 9th Company under Brother Captain Furio.[1a]

Meros was a simple line-Astartes of solid if unremarkable service. Following the battle of Melchior, First Captain Raldoron tasked Meros with removing the progenoid glands from Brother Alatros, then instructing him to never repeat what had happened to anyone.[1a]

During a war against the Dark Eldar on Nartaba Octus, Meros was assigned to Task Force Ignis, a Blood Angels flotilla overseeing the evacuation of the human population of the planet before it was subjected to Exterminatus. Part of the last group off the planet, the Stormbird Meros was riding in was shot down by a Soul Seeker round and Meros slipped into a poison induced coma. In an attempt to save the injured apothecary, Sergeant Cassiel and Brother Sarga placed Meros in one of the exsanguinators, the blood coffins used in the Blood Angels neophyte transformation process. The intent was to drain the poisoned blood from Meros and replace it will fresh, clean blood. During his time in the exsanguinator, Meros met Brother Rafen through a genetic link they shared and who has in the same exsanguinator, albeit ten thousand years in the future. The two soon found that they were not alone, encountering the Sanguinor. Unable to believe what he was seeing, Rafen pulled his bolter on the mysterious entity, and Meros, assuming that the Sanguinor could only be Sanguinius himself, tried to stop him. When Rafen told Meros that Sanguinius had been dead for ten thousand years and that there was no Blood Angels Legion anymore, Meros attacked Rafen in a rage. Before the two could kill on another they were beset by phantom enemies; blood memories of past victories. Fighting side-by-side the two Blood Angels found a sense of camaraderie but it was Rafen who figured out what the magnitude of the two meeting could mean. Before they were pulled from their parallel yet separate blood comas, Rafen managed to utter a single word: Horus, but the Sanguinor appeared and placed its finger over his mouth, indicating that Rafen was to be silent. At that moment, both were pulled back to their respective realities. Upon awakening, Meros was presented before Azkaellon, Captain of the Sanguinary Guard. who was impressed by his resilience. Azkaellon then informed the assembled Astartes that they had received orders from the Warmaster to gather the entire IX Legion at the Signus System. [1][2]

During the Blood Angels cleansing of the Signus System, Meros served aboard the Red Tear, the flagship of the Legion. When the Legion discovered derelict starshps drifting aimlessly through the system, Meros was one of the apothecaries called to examine the bodies of the slain. To his horror, Meros discovered the bodies simply had no bones, nor was there any trace of what had killed the humans. The blood of the bodies had been a strange pinkish hue that reminded Meros of the color of the Warp.

During a search and rescue mission to the planet Holst in the Signus system, Meros and his squad, along with a seemingly loyal squad of Word Bearers, encountered a Warp possessed Hive City. The city itself tried to kill them, using Frankenstein-esque monsters of rebar, concrete and steel. During their attempted escape from the city's outer precincts, Meros stumbled upon the body of a slain Word Bearer and noticed his blood was the same pinkish hue of the Warp touched humans. Before he could conduct an in-depth study, the Word Bearer's Captain drove him off, demanding he leave the slain warrior at peace. The Blood Angels and Word Bearers were only saved by the personal intervention of Captain Amit who used Thunderhawks and Storm Ravens to destroy a maggot-like creature made from abandoned subway tunnels. Holst was subsequently destroyed by orbital bombardment. [1]

Meros was part of the detachment that traveled to Signus Six and rescued a small band of survivors, among their number a Blank. It would be on Signus Prime that Meros would meet his ultimate fate. After Sanguinius was knocked unconscious by the Blood Thirster Ka'Bandha, Meros took part in a strike team to destroy the daemons fortress, the Cathedral of the Marque. While the rest of the legion, save the handful in the strike force under First Captain Raldoron, were gripped by the Red Thirst, Meros and his brothers fought through hordes of Daemonettes and Bloodletters to infiltrate the Cathedral. It was during the final confrontation between Sanguinius and the two Greater Daemons, Ka'Bandha and Kyriss the Perverse, that Meros sealed his fate. After Sanguinius threw Ka'Bandha to its death from the tower of the Cathedral, Kyriss offered the Angel a deal. The daemons, along with First Chaplain Erebus of the Word Bearers and Chief Apothecary Fabius Bile of the Emperor's Children, had created a cursed artifact of pure rage, using the half dead body of Captain Tagas who was believed to have been slain on the planet Murder years earlier. Stripped of all that made him a Blood Angel, Tagas was driven mad with pain and rage and was the conduit for the rage that had consumed the Blood Angels Legion. Kyriss's deal was simple: Sanguinius need only step into the swirling vortex of blood and rage and allow his body and soul to be fully corrupted. In return, Kyriss would cure the Blood Angels of both the Red Thirst and the Black Rage forever. Seeing that Sanguinius was seriously considering taking the deal, Meros leapt into the Chaos realm instead, followed swiftly by Sanguinius. Inside the vortex, Meros refused to let his Primarch take the deal. Instead Meros cut out his own geneseed and offered it to Sanguinius before allowing the rage to possess him. Meros the apothecary was dead, and the Red Angel had been born. [1] 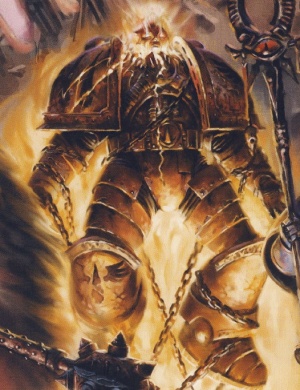 Sanguinius confronted the daemon and demanded Meros be freed. When the Red Angel refused, Sanguinius softly asked if anything of Meros remained that could hear him. After a moment the Red Angel responded that there was a small part. Sanguinius promised Meros that his sacrifice would not be in vain and that Sanguinius would find a way to kill the daemon that now possessed him. Without further words, the Red Angel disappeared into the swirling Warp Gate it created. [1]

The Red Angel would later present itself to Horus aboard the Vengeful Spirit and claim it would be a weapon in the Warmaster's hands. When asked by Ererbus why the daemon thought it could take the name "Red Angel" which belonged to Angron, the daemon merely responded that the name fit it better and that it would fight Angron if the primarch took issue with that. The ultimate fate of the Red Angel is unknown. [1][3]

Because Meros removed his geneseed before his sacrifice, his genetic legacy was able to continue. Eventually his geneseed would be implanted in Rafen, who was greatly honored to bear the geneseed of a hero of the Legion and a man who personally saved Sanguinius.[2]